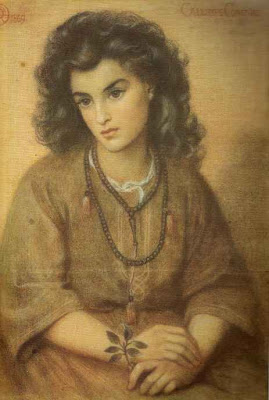 Born in 1856, Calliope belonged to the large Anglo-Greek family of Ionides. Her Mother was Aglai Coronio
http://preraphaelitepaintings.blogspot.com/2010/06/g-f-watts-portrait-of-aglaia-coronio.html
the eldest daughter of Alexander Ionides, the wealthy head of a merchant house who had settled at Tulse Hill who was famous for his hospitality towards the artistic community. Her Uncle Constantine formed the magnificant collection of paintings, drawings and prints now in the V&A. Another Unclw was Alexander ('Alecco') Ionides who appears as 'the Greek' in Du Maurier's Trilby and had a house at 1 Holland Park
http://en.wikipedia.org/wiki/Holland_Park
Another Uncle Luke was close friends with Burne-Jones while his sister Chariclea was also well known
http://preraphaelitepaintings.blogspot.com/2010/06/g-f-watts-portrait-of-miss-chariclea.html
Calliope was known as 'Opie' and was the oldest child, a brother John being a year younger. This portrait (she was also painted by Watts) dates to 1869 when she was 13 and shows her in Greek national costume.

She married Parasqueva Sechiari when she was 33 who seems to have been much older than her and she died in 1906. The next day her mother committed suicide with scissors.
Posted by Hermes at 5:00 PM