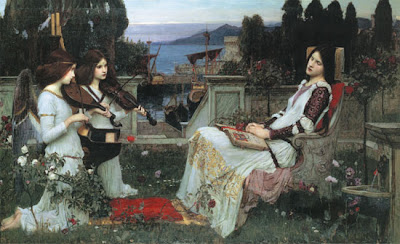 
A Pre-Raphaelite painting of a sleeping St Cecilia was bought for a world record £6m last night by the composer Lord Lloyd-Webber.

The painting, by the British artist John William Waterhouse, fetched the highest price paid at auction for a Victorian work of art. Lord Lloyd-Webber, who had wanted to buy the 1895 work for some time, paid nearly twice the pre-sale estimates for the auction at Christie's. It eclipsed the previous record for a Victorian painting held by another Pre-Raphaelite painting - Sleeping by Sir John Everett Millais - which sold for £2,091,500 at auction in June last year.

The St Cecilia changed hands for £2,415 in 1913 - a huge sum at the time - and was then lost before being rediscovered in the 1960s. The painting, which depicts two youthful angel minstrels serenading the patron saint of music while she rests in a marbled chair, was last seen in public more than 30 years ago.

Speaking after the auction, Lord Lloyd-Webber, 52 said: "I've collected Victorian paintings since I was a teenager, many of which I bought for tens of pounds and this Waterhouse is the best I've ever seen."

Jonathan Horwich, head of the British and Irish Arts department at Christie's, said after the auction that the St Cecilia was a magnificent painting that had fetched a magnificent price. "This work is the most important Victorian painting ever sold. It is a stunning price. It remains a picture of great originality. It could never be mistaken for the work of anyone but Waterhouse."
Posted by Hermes at 12:41 PM