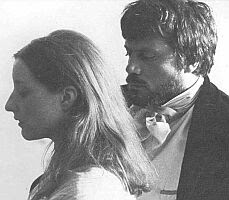 [Judith Paris as Lizzie Siddal and Oliver Reed as Rossetti]

This seems to have disappeared. Dante's Inferno: The Private Life of Dante Gabriel Rossetti, Poet and Painter (1967) is a feature-length 35mm film directed by Ken Russell and first screened on the BBC on 22nd December 1967. It quickly became a staple in cinemas in retrospectives of Russell's work. It tells of the relationship between the 19th-century artist and poet Dante Gabriel Rossetti and his model, Elizabeth Siddal.

Russell had made an earlier film for television about the pre-Raphaelites called Old Battersea House (1961), the success of which had drawn attention to the then unfashionable art. Russell's original intention was to make a film showing the lives and works of the three main Pre-Raphaelite painters - Millais, Rossetti and Holman Hunt, but the arrival of a script into Russell's office at the BBC by Austin Frazer, solely about Rossetti, prompted Russell's change of plan. He thought that a story about a man who exhumes his dead wife and then is haunted by the deed was highly dramatic and marketable. Russell cast many of his friends and used amateur actors, including the pop artist Derek Boshier as Millais and the poet Christopher Logue as Swinburne." Much of the location shooting was done in the Lake District.

Thanks for bringing this movie to attention...looks fascinating! Just to let you know that I checked Netflix over here in the states and it's available so I bumped it to the top of my queue. Thanks again...I love Rossetti :>]

It is an interesting flick. I have it on some drive somewhere.

Still, I was more fond of the visually rich recent miniseries. Black and White film for a movie about painters who worked so gloriously in colour just doesnt do the subject justice.

Thank you, it's not on LoveFilm here in the UK, but it seems a pity its not in colour. I didn't like Desparate Romantics here on tv. Perhaps we develop our own visions of our heroes.

It is available on a fabulous box-set called 'Ken Russell at the BBC' which is only issued on Region 1 at the moment but worth every penny. The TV films have been cleaned up so look very good or better than the other version I have on VHS.

Many thanks for the information.