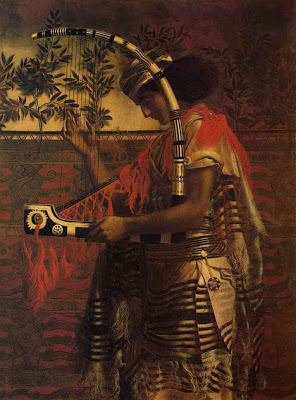 A young musician employed in the temple service during the feast of tabernacles, later called hosanna
signed with monogram and dated l.l.: SS/3/61
oil on canvas
56 by 51 cm., 22 by 20 in.

This beautiful early painting by Simeon Solomon has not been exhibited or recorded since the time of the Royal Academy Winter Exhibition of 1906, the year after the artist's death. It is a highly important rediscovery from the fascinating period in English art when the new and progressive Aesthetic style of painting emerged, in which movement Simeon Solomon was a vital figure.
The original title of the painting, A Young Musician employed in the Service during the Feast of Tabernacles - and as such it was first exhibited at the 1861 Royal Academy - indicates that, although the painting was intended to represent a remote historical epoch, it does not show a particular incident or character from the Old Testament. In this sense it represents a departure from Solomon's two earlier Royal Academy exhibits - which were a Biblical subject showing the Lord's order to Abraham that he should sacrifice his son Isaac, shown in 1858, and a figure of Moses, shown in 1860. With A Young Musician Solomon treats for the first time a theme without ostensible subject beyond that implicit in the action of the figure. The main elements of the subject were described by F.G. Stephens in the Athenaeum in his review of the 1861 exhibition: 'A youth, of the highest Jewish type, is seen bearing the immemorial ten-stringed harp, such as we find sculptured on the Ninevite bas-reliefs. From its construction not allowing strength against a high tension of the chords, this must have been a low-noted instrument. We may imagine the sweet pulsings of the music as the player's slender fingers draw the strings.'
Solomon had been brought up within the Jewish community of London's East End. His attendance at synagogue as a child and his long familiarity with Jewish religious ritual made subjects showing such practices very personal to him. His friend William Blake Richmond wrote of him and of his early paintings and drawings of Jewish subjects: 'No one but a Jew could have conceived or expressed the depth of national feeling which lay under the strange, remote forms of the archaic people whom he depicted and whose passion he told with a genius entirely unique.' (A.M.W. Stirling, The Richmond Papers, London, 1926, p.161) Of the present painting, the Times especially approved its religious character: 'We commend Mr S. Solomon for his hearty nationality. He paints Jewish subjects, as a Jew should, with evident reverence and delight in recalling the mystery and greatness of the chosen people.' According to the Art Journal, the painting was 'redolent of deep and pious feeling.'
Among the circle of critics who understood the innovations that Solomon's painting represented A Young Musician was seen as a great achievement and a point of arrival in the young artist's career. The Athenaeum believed that 'Mr Simeon Solomon [was] rapidly developing into a fine artist, coming out of the extravagancies and exuberant freaks of execution he at one time indulged in' but that this was undoubtedly 'a work remarkable for sweetness of expression and solid execution.' The Times concluded: 'This is a very impressive and noble figure, not marred by the ugliness in which Mr Solomon has sometimes appeared to revel.' The painting was bought at the Royal Academy, or perhaps had already been acquired, by the Leeds stockbroker and collector of Pre-Raphaelite paintings Thomas Edward Plint. Plint died shortly afterwards, and the painting appeared at auction in 1862 where it was bought by the picture dealer Ernest Gambart.
The motif of a figure playing an archaic and richly decorated harp seems to have been first explored by Solomon in an elaborate pen drawing entitled ''Babylon hath been a golden cup'' (Birmingham City Art Gallery), made and exhibited in the autumn of 1859. The following summer a multi-figured ink drawing (ex Lord Houghton collection) included the figure of a musician in profile with his head bowed and with his harp resting against his cheek. The pose was elaborated in a further drawing which has all the essential elements of the composition of the present painting (although the treatment of the background is different). This drawing, entitled A Jewish Musician in the Temple (Huntingdon Library, California), was made by way of preparation for an illustration for the illustrated Bible that the Dalziel brothers were then contemplating (and was in fact included as a plate with the title Hosannah in the book as it was eventually published in 1881 (illd The Brothers Dalziel -A Record of Work - 1840-1890, London, 1901, p.259)). The present painting corresponds closely to the final engraved image.

And cheap at the price for that quality.