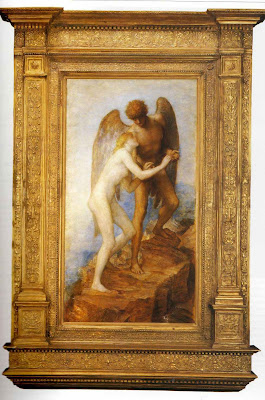 A major work of Watts that seems to be a companion piece to Love and Death (see below). This wonderful piece was painted in various forms over a decade or so from 1884 onwards with what many consider the 'prime' version to have been shown at the Grovesnor Gallery in 1885. There is also a version in the Musee d'Orsay.
The steps represent the path from base existence to the nobler realms of thought and character.
.
this version was auctioned by Sotherby's in 2001.
oil on canvas
115 x 57 cm
it was exhibited in the Exhibition Universelle (British Fine Art Section), Paris in 1889.

Watts's Love and Life seems to have been conceived as a companion subject and counterpart to Love and Death, in which the draped figure of Death is momentarily obstructed at a doorway by a cupid. The painter was occupied with the prime version of Love and Death (Whitworth Art Gallery, University of Manchester) in the mid-1870s, and showed the work at the first Grosvenor Gallery exhibition in 1877. The first version of Love and Life was, according to Mrs Barrington (G.F. Watts - Reminiscences, London, 1905, p.129), begun early in 1884, and finished the same year. Of the subject of the allegory, G.F. Watts explained in a note transcribed into the MS catalogue of his works compiled by Mary Watts: 'I would suggest frail and feeble human existence aided to ascend from the lower to the higher plane by Love with his wide wings of sympathy, charity, tenderness, and human affection. Love is not intended to be either personal or carnal.' On a further occasion Watts defended the composition, which he said was 'often cited as a failure, especially with reference to the fragility of the figure of Life': 'I may have pushed this slightness too far, but I wanted to insist on the weakness of human existence far down among the lower creatures but for the vivifying and uplifting impulse of sympathy.' Elsewhere he wrote: 'My female figure is fragile, but what is life in the midst of the immensities? Love I have only suggested as powerful by wings, for material muscular forms seem to me to be out of character in a design which has to do only with the purest abstractions. Also I made the figures perfectly nude, for they are only symbols, and have nothing to do with aught but the simplest conditions; in like manner the surroundings represent nothing but the very simplest ideas. They are the rugged steps of the path which leads from the baser existence to the nobler region of thought and character.' (Quoted from M.S. Watts, George Frederic Watts, three volumes, London, 1912, II,pp.234-5)

Love and Life was painted in various versions, over a decade or so from 1884 onwards. What was presumably the prime version appeared at the Grosvenor Gallery in 1885. Some years later Leon Benedite, director of the Luxembourg in Paris approached Watts with a request that the museum might buy a work of his. Watts responded by presenting a version of the present subject, and which is now in the Musee d'Orsay. The French critic Robert de la Sizeranne was said to have been amazed by the power of the subject, which he knew from a version which Watts placed on loan to the South Kensington Museum, and it was the impact of this painting that caused him to return to a belief in the necessity of symbolic power in art, as opposed to mere naturalism, a view that he expounded upon in an essay in the Revue de Deux Mondes.
Posted by Hermes at 6:24 PM