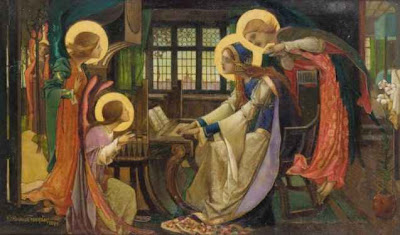 St Cecilia is believed to have lived in the 2nd or 3rd century as a chaste bride and Christian Martyr. Her attributes are flowers, since an angel watching over her is said to have placed crowns of lilies or roses on her brow, and musical instruments (she is the patron saint of music) particularly the organ as an early account of her life refers to music played on her wedding day. She and her husband were later imprisoned and executed.

‘Or, in a clear wall’d city on the sea
Near gilded organ pipes, her hair
Wound with white roses, slept St Cecily;
An angel look’d at her.’

Later Pre-Raphaelite artists visualised St Cecilia as a more passive figure, for example softly dreaming to the heavenly music of the angels in Waterhouse’s St Cecilia of 1895. Frampton is known to have painted St Cecilia on a number of occasions and exhibited versions at the Royal Academy in 1911 and 1917. The 1905 depiction (sold Sotheby’s, June 1993) is a classic portrayal of St Cecilia with its castle architecture, flowers and angelic visitation. Rudolf Dircks, writing in the Art Journal in 1907, commended Frampton’s painting and stated that ‘In St Cecily, have we not a precise and sympathetic interpretation of the lines of Tennyson – in which the full, poetic beauty is apprehended pictorially?’

The present, earlier painting, represents an important stage in Frampton’s development of a subject that was to prove central to his art. The picture is an unusual interpretation of the subject without the usual view of the sea from the towered battlements. However, the presence of the angels and the inclusion of the organ at the centre of the composition makes Frampton’s subject clear.
Posted by Hermes at 6:00 AM