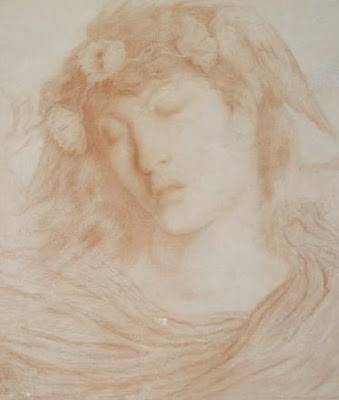 In the latter part of Solomon's career, a period troubled by scandal, vagrancy and extreme poverty, he made a series of Symbolist studies of androgynous heads, remarkably powerful and ethereal allegories often drawn in red chalk. The present drawing depicts the Greek God of Sleep Hypnos who, according to mythology dwelt in a cave close to the source of Lethe, the river of forgetfulness around which the poppies of somnolence grew. It is likely that Solomon was inspired by the 1st century bronze head of Hypnos in the British Museum although parallels have also
been drawn between Rossetti's Beata Beatrix (various versions, one of which is at Birmingham Art Gallery) and pictures by European Symbolists such as Redon, Lévy-Dhurmer and particularly Khnopff. Hypnos, the God of Sleep is a variant of Solomon's The Winged and Poppied Sleep of 1889 (Aberdeen Art Gallery).
Posted by Hermes at 6:00 AM

lovely and beautiful!
I enjoyed the choice.
Good evening!

I just love his work, so delicate. Shame about his tragic life - but perhaps that was the price for his genius.