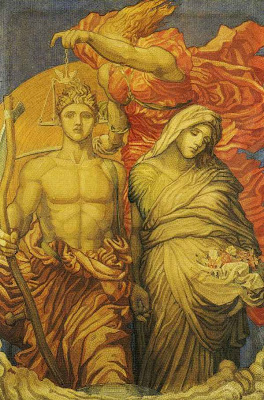 after G F Watts
[Time, Death and Judgement]
inscribed It is appointed unto man once to die, but after this the judgement
.
fl. 1877
Schott was Watt's studio assistant and was one of several versions of this work. It is thought to be a design fot the mosaic originally placed on the facade of St. Jude's Church, Whitechapel which was unveiled in 1884.
.
http://www.artnet.com/artist/617937/cecil-schott.html

Watts began work on Time,Death and Judgement in the 1860's and made three large versions (National Gallery of Canada, Ottawa, St.Paul's Cathedral, London and the Tate Gallery, London). This version by Cecil Schott, Watt' studio assistant, may be a design for the mosaic originally placed on the facade of St. Jude's Cathedral, Whitechapel. Matthew Arnold gave an address at the unveiling of the mosaic in 1884 in which he urged the poor to be 'sober, patient, charitable, kind' in order that 'after this life they could wake up in a world as little like Whitechapel as possible.' St Jude's Church was later demolished and the mosaic transferred to the facade of St. Giles-in-the-Fields Church School, Holborn and subsequently moved again to the churchyard of St. Giles-in-the-Fields.
Posted by Hermes at 6:00 AM