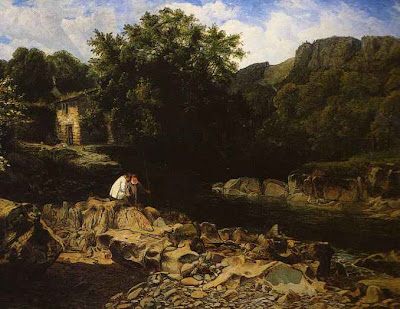 This view on the Llugwy River in North Wales was painted in the summer of 1862, the year when Charles Napier Hemy first devoted himself professionally to art. Hemy had recently abandoned his ambition to become a Catholic priest, and only as recently as May 1862 he had been living as a monk in a Dominican monastery at Lyons in France.
The minute attention to detail demonstrated in Hemy's On the Llugwy, June, particularly in the foreground area of pebbles and rock eroded by the action of flowing water, is characteristic of the artist at this early stage, when he was strongly influenced by Pre-Raphaelite principles of observation. Hemy's best known painting, Among the Shingles at Clovelly (Laing Art Gallery, Newcastle upon Tyne) - an extraordinary and exacting exercise in Pre-Raphaelite technique - was painted two years later, in 1864.
Posted by Hermes at 6:00 AM