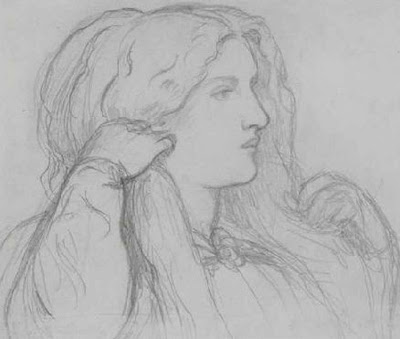 This drawing was almost certainly made around the same time as a half-length sketch of Fanny Cornforth (born Sarah Cox, c.1835-1906) with her hands behind her head and her hair falling loosely over her shoulders, c.1862 (National Gallery of Scotland). Much has been written of Fanny Cornforth, her humble background and her
relationship with Rossetti. She appears to have met him around Christmas 1857 and played a pivotal role in Rossetti's change of style in the 1860s from the medievalism of his earlier pictures to the more voluptuous beauty studies of his maturity. In the early 1860s she was his regular model, mistress and sometime house-keeper; frank, earthy, sensual, energetic, light-fingered and affectionately loyal. One of Fanny's most remarkable features was her
luxuriant flaxen hair that fell almost to her ankles and was often worn in a thick chignon. Rossetti was fascinated by Fanny's hair and brushing and arranging her tresses was the subject of several important oil paintings depicting her,
including Lady Lilith, Fazio's Mistress and Woman Combing her Hair. Although various stories have been given regarding Rossetti's first meeting with Fanny, one recounts that he introduced himself to her by undoing her hair whilst her back was turned.
Posted by Hermes at 6:00 AM