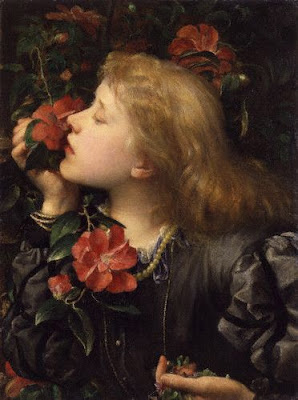 National Portrait Gallery
This delicate yet sensuous portrait shows the seventeen-year-old Ellen Terry choosing between the camellias, which despite their luscious appearance have little scent, and the violets in her hand which are far humbler in appearance but smell sweeter. The choice, which is symbolic of that between worldly vanities and higher virtues, had a personal significance for the artist and the sitter. 1864 was the year in which Terry gave up the stage to marry Watts, thirty years her senior, and to be educated by him. The marriage lasted barely a year, and despite Watts's disapproval, Terry eventually returned to the stage. The portrait is framed in an enriched version of what became known as a Watts frame
http://www.npg.org.uk/collections/search/portrait.php?search=sa&OConly=true&sText=george+frederic+watts&LinkID=mp04730&page=2&rNo=19&role=art
Posted by Hermes at 1:50 PM

This is one of my favourite paintings and I have seen it at the National gallery. It is a very sensitive image. Really beautiful.

I think I saw it years ago, and you are right it is beautiful. I always feel nostalgic when I see ths.