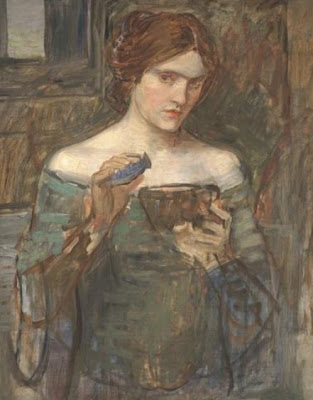 The present picture was identified by Dr Anthony Hobson in his catalogue raisonnee of
1980 as The Love Philtre and dated c.1914. A pencil inscription on the reverse of the
present picture confirms the title. It is likely, however, that this picture was painted c.1907 as it appears to relate more directly to the female figure in Jason and Medea exhibited that year (FIG 1. sold in these rooms, 15 June 2000, lot 46).

Two variant sketches for the same figure are known (private collection and another sold in these rooms, 15 March 1983, lot 74) and suggest that Waterhouse originally intended to paint Medea alone and that the addition of Jason came at a later stage.
In classical mythology the sorceress Medea was the daughter of King Aeetes of
Cholchis to whose kingdom the hero Jason and his Argonauts travelled in search of the
treasured Golden Fleece. Medea used her magical skills to make a potion for Jason,
with whom she had fallen in love, to imbue him with invulnerability and superhuman
power during his imperiled and terrifying quest for the fleece.

From the early 1890s Waterhouse concentrated increasingly upon subjects from
mythology, painting a striking series of pictures that are among the most compelling
and darkly beautiful of all Victorian paintings. Among the most important mythological pictures of this period were Ulysses and the Sirens of 1891 (National Gallery of Victoria, Melbourne), Hylas and the Nymphs of 1896 (Manchester City Art Gallery), Flora and the Zephyrs of 1898 (sold in these rooms, 6 November 1996, lot 307) and Echo and Narcissus of 1903 (Walker Art Gallery, Liverpool). The sorceress subject had first been painted by Waterhouse in 1886 in The Magic Circle (Tate Britain) and in 1891 he painted his first potion-themed picture depicting a beautiful witch holding aloft a magical liquid in Circe Offering the Cup to Ulysses (Oldham Art Gallery). The motif continued in 1892 when he painted Homer's sorceress again, enchanting the sea with lurid green poison in Circe Invidiosa (Art Gallery of South Australia, Adelaide).

Medea was a favourite subject for nineteenth century painters. Notable depictions
include those by Frederick Sandys of 1868 (Birmingham Museum and Art Gallery),
Valentine Cameron Prinsep of 1888 (Art Gallery of South London) and Waterhouse's
friend Herbert Draper, who painted a dramatic image of Medea and Jason's departure
from Colchis in his 1904 work The Golden Fleece (Bradford City Art Gallery). In Europe the subject of female sorcery also had innumerable artistic supporters, finding its zenith with Symbolist artists like Gustave Moreau, Fernand Khnopff and Gustave Klimt who made Medea one of their queens of decadence, sexuality and exoticism. Thus, Waterhouse's images of magic and mythology can be regarded in a wider European context.

In the present work Waterhouse has laboured first and foremost to convey the wistful
charm and psychological intensity of his subject at the pivotal moment in a private
drama as she pauses and ponders all that is about to transpire. 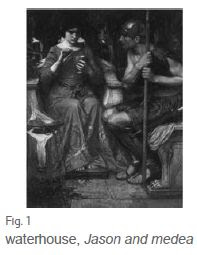