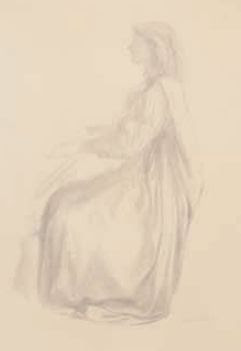 Despite Ellen Terry’s blooming theatrical career, she willingly sacrificed the stage at the age of only 16 to marry G.F. Watts, who was 30 years her senior. Within a year
the marriage had failed. A later deed of separation cited “incompatibility of temper”.

This rather tender drawing by Watts shows the young Ellen at the piano. It was
formerly in the collection of Watts’s adopted daughter Lilian Chapman (née
Mackintosh); who inherited a number of the artist’s paintings and drawings.
Posted by Hermes at 6:00 AM

What an interesting image, I have not seen that before. I very much enjoyed reading Michael Holroyd's collective biography of Ellen terry, Henry Irving and their respective children last year.

Thanks indeed for sharing

I hadn't seen that book - though I read himon Shaw. Terry's marraige with Watts was disastrous but fascinating. I don't actually like Watts much as a human being - but he sure could paint.