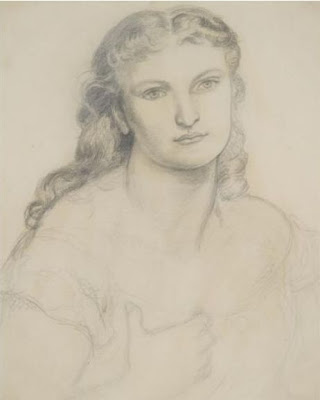 Virginia Surtees, The Paintings and Drawings of Dante Gabriel Rossetti: A Catalogue Raisonné, 1971, p. 206,
no.580

This drawing has been identified as relating to Rossetti's painting Venus Verticordia (Russell-Cotes Art Gallery, Bournemouth) begun in 1863 and completed in 1868. In this study the hand of Venus is cupped to hold the golden apple awarded to Venus by Paris and she is dressed in a low-cut bodice, little more than an underslip. William Michael Rossetti recalled that his brother had been 'on the look out for some person to serve as a model for the head and shoulders of his Venus, noticed in the street a handsome and striking woman, not very much less than
perhaps than six feet high... He spoke to this person, who turned out to be a cook serving in some family in Portland Place, and from her he at first painted his large "Venus Verticordia".' It is almost certain that this drawing depicts the
same cook, described by William Allingham as 'a very large young woman, almost a giantess.' She appears in another drawing relating to the painting in the Witt Collection at the Courtauld Institute, although it has been suggested that the present drawing predates it, perhaps earlier than any other sketch for the picture.
Posted by Hermes at 6:00 AM