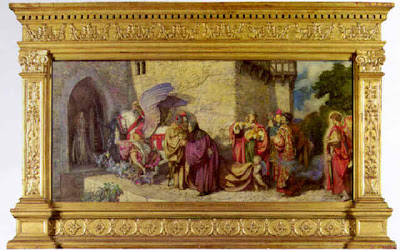 [Love and his Counterfeits]
Pencil and Watercolor w/scratching out, laid down on canvas
26 x 52.4 in.
Signed 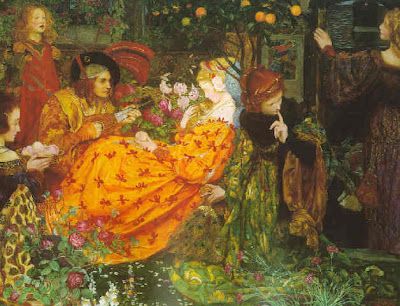 [The deceitfulness of riches]

The present richly coloured allegorical subject, The Deceitfulness of Riches, is one of the most ambitious of Eleanor Fortescue-Brickdale's early paintings. It was first exhibited in 1901 at the Royal Academy, and then subsequently included in the exhibition of her oils and watercolours held at Leighton House in February 1902. This exhibition was entitled ''Such Stuff as Dreams are made of!'' (a loose quotation from Shakespeare's The Tempest).
The majority of Fortescue-Brickdale's paintings have literary themes and she was of course also well known as an illustrator of poems, legends and folktales. However, on the present occasion both the painted subject and the words of the title were of the artist's own devising. When first exhibited, there was much debate as to the purpose of the allegory, which, according to M.H. Dixon, was 'translated into a hundred meanings and tortured by the spring visitor to Burlington House into symbols little dreamed of by its originator.' In the same article in the 1902 Magazine of Art the following interpretation was offered: 'A mighty princess, clothed in orange garments, is pictured for us so closely guarded by jealous attendants as to be shut out altogether from the outside world. No harsh breath from the common air may touch the lady's cheek. The orphan and the widow are turned from her gates in order that she may not look upon the face of sorrow. Not willingly hard or callous is this prisoner of a luxurious place, only oblivious from force of circumstances. ... ''The Deceitfulness of Riches'' is a lay sermon on the tyranny of soft environment and on the unwitting cruelty which lurks in ignorance.' The subject of a young woman leading a sequestered existence - being offered flowers and fruit by attentive servants and serenaded by a musician with a lute, is entirely in character with the other-worldly and historicist instincts of the artists who revived the principles of Pre-Raphaelitism at the turn of the century.

The Deceitfulness of Riches represents the type of painting that led Eleanor Fortescue-Brickdale to become one of the admired and talked-about painters of the day. In 1901, on the occasion of an exhibition of her watercolours at Dowdeswells Gallery in New Bond Street, she was described by one critic as a 'Pre-Raphaelite revivalist', and by another as an exponent of 'Neo-Pre-Raphaelitism'. These terms indicate that the artist was recognised as one of the younger generation of artists who at the turn of the century were consciously reviving the meticulous techniques and luminous colour of Ford Madox Brown, Holman Hunt and Rossetti. In the same year Canon Scott Holland wrote ecstatically of Fortescue-Brickdale's appearance on the artistic scene: 'We are not all dead. There is a new force to be felt. There is a new lamp kindled. Some one can still see visions: and can embody what is seen in the glory of colour ...' Commenting on the Dowdeswell exhibition, Holland was struck by the richness of the work, exclaiming: 'Colour? The room glows with it, as if it were flung out of live jewels. The flaming crimsons, the crisp greens, the sheen of rose, speak and sing out of their frames; and you find yourself laughing aloud unawares, for sheer delight, in response. The pictures recall the small gems that Rossetti painted ... They are vivid and delicate like young Millais' ''Ferdinand''.' The rich colour, as well as the technical elaboration, of The Deceitfulness of Riches, was commented upon in the Spectator's review of the 1901 Royal Academy: 'Gorgeous and beautiful in colour, its execution seems to suggest that the artist, not having quite realised the conditions of oil paint, has been trying after the effects of enamel and coloured relief.'

http://www.sothebys.com/app/live/lot/LotDetail.jsp?sale_number=LN8683&live_lot_id=46
Posted by Hermes at 6:00 AM