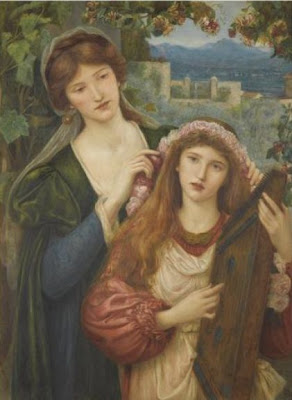 Cecily (Cecilia) is the patron saint of music due to it being said that as she was martyred in c.230 she sang a song in honour of God. It is thought that she was a Roman of noble birth, an only child who took a vow of celebacy when she was young and upon marrying convinced her husband Valerian to accept sexual abstinence. Valerian would only agree to the pledge if Cecilia's guardian angel appeared before them, which duly came about. The angel placed garlands of roses and lilies onto the heads of Cecilia and Valerian. Valerian and his brother Tibertius
converted to Christianity and were executed with Cecilia for their beliefs. Alfred Tennyson described the apparition of the angel to Cecilia in his poem of 1833 The Palace of Art:

'Or in a clear-wall'd city on the sea
Near gilded organ-pipes, her hair
Wound with white roses, slept St. Cecily;
An angel look'd at her.'

Marie Stillman's painting does not appear to depict Tennyson's lines, although the 'clear-wall'd city' is present (although it is not by the sea). A more literal rendering of the poem was given by John William Waterhouse in 1895 in his well-known composition painted more than a decade after Stillman's (Lord Lloyd Weber Collection). Stillman appears to have invented the subject of the picture, with the child Cecily and an attendant in a secluded bower in an Italian palazzo. The architecture and landscape almost certainly depict Tuscany as Marie Stillman and her family were living in Florence at the time that the picture was painted. The model for Cecily may have been Marie's eleven-year-old daughter Effie (Euphrosyne). The features of the attendant are almost certainly those of Marie herself who was celebrated for her beauty and grace; she was a model for Rossetti, Burne-Jones, Madox Brown and Spencer Stanhope. Rossetti wrote that Marie, 'possessed a face superlatively beautiful.' (Letter from Rossetti to Ellen Heaton, 9 January 1868, British Museum) and although she was more than ten years older when the present
watercolour was painted, she remained beautiful.

Born in 1844 in Tottenham in Middlesex (other sources state that it was Hornsey), Marie was the youngest daughter of Euphrosyne and Michael Spartali, a wealthy and cosmopolitan merchant and later Greek consul general for London. Marie and her sister Christine and brother Demetrius were raised in a large house in Clapham, which
became the centre of the Greek community in the 1860s. The Anglo-Greek connoisseur Constantine Ionides who patronised Burne-Jones and Rossetti and whose collection is now at the Victoria and Albert Museum, was a great friend of the Spartali's and it was probably this connection that led to Marie being 'discovered' by the Pre-
Raphaelites. Marie was also a close friend of Maria Zambaco (nee Cassavetti), Burne-Jones' mistress and model and Aglaia Coronio the confidante of both Rossetti and William Morris and the three women were known as the 'Three Graces' after their Greek heritage and striking beauty. It is said that the Spartali girls' debut was made in the late 1860s at a garden party in Tulse Hill given by relations of the Ionides family, where their arrival caused a stir among the invited artists. 'We were all á genoux before them and of course every one of us burned with a desire to
paint them' recalled the artist Thomas Armstrong. The perceptive Graham Robertson described Marie thus, '... a lofty beauty, gracious and noble; the beauty worshipped in Greece of old, yet with a wistful tenderness of poise, a mystery of shadowed eyes that gave life to what might have been a marble goddess.' (Graham Robertson, Time
Was, 1931, pg. 13) whilst the poet Swinburne exclaimed that she was 'so beautiful I feel as if I could sit down and cry' (Thomas Armstrong, A Memoir 1832-1911, 1912, pg. 195).

Marie's charm was not limited to her physical beauty and she was possessing of a warm and generous personality, great intelligence and much artistic talent as The Childhood of Cecily testifies. She was arguably the most talented of the female Pre-Raphaelite artists, painting over a hundred works in the 1870s and 1880s in a rich style derived from that of Rossetti and of Ford Madox Brown. A beautiful example of her work Portrait of a Young Woman which was painted a year before Marie posed for Rossetti, was offered in these rooms 14 June 2001. The files at the
Delaware Art Museum note that 'she was a very serious artist, working regularly every day in a very disciplined way until her death in 1927 at the age of eighty-three' (catalogue of the collection of the Delaware Art Museum 1974, pg. 172). Her paintings have the same whimsical romance as those of her male counterparts but she will be perhaps always be best remembered as a Pre-Raphaelite model, one of the small group of women whose faces shaped the British notion of beauty.

The composition of The Childhood of Saint Cecily may have been suggested by Dante Gabriel Rossetti who in 1879 asked Marie to pose for the studies for a picture he was devising, depicting Desdemona's servant Amelia dressing the hair of her mistress as Desdemona sings the mournful Willow Song. In Marie's picture she also depicted a girl with her lips parted in song, lost in her thoughts as another woman arranges her hair. The themes of female beauty, music, Medievalism and long red hair are particularly Rossettian and the subject of St Cecily was one that Rossetti drew for a successful drawing made in 1856 for illustration in Edward Moxon's edition of
Tennyson's poems. Whilst Rossetti opted for a sensual, almost erotic rendering of the saint on the battlements of a high-walled palace being ravished by a male angel, Stillman presented a more restrained and gentle image of contrasting female beauties. However, the inclusion of honeysuckle and roses, the symbolism of both being aphrodisiacal, suggests an element of awakening womanhood. Clad in red and white, the colours of passion and purity, Cecily's robes suggest an opposition of the carnal and sacred, of virginity and sensuality.
Posted by Hermes at 5:00 PM

This blog is grand! I look forward to exploring it more thoroughly.

Thank you very much, kind.