Arthur Hughes - The Font, Then by a Sunbeam I will climb to thee 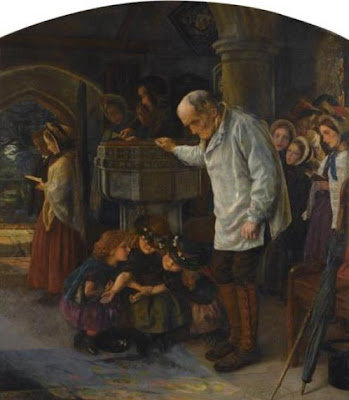 The setting is that of a Medieval English church, through the doorway of which can be glimpsed a yew tree bathed in sunshine. On the threshold of the open church door sits a robin listening to the singing of a hymn by the pious congregation. They read from their song-books and do not notice the bird or the three small village girls bedecked in bonnets decorated with wild daisies, who are playing beside the carved stone font. They are making the rainbow light flooding through the stained glass windows dance along their white arms and the floor of the church and only
one person notices them, an aged fellow who reflects on his lost youth as he looks down on the children playing.

Hughes's best known paintings of the 1850s, April Love (Tate) and The Long Engagement (Birmingham Museum and Art Gallery) were accompanied by lines of poetry when they were first exhibited, quotations being made from Tennyson's The Miller's Daughter and Chaucer's Triolus and Cresyde respectively. In both paintings the poetry
serves to support the painting's moods rather than to serve as narrative text. The same is true of the present painting, which takes its text from George Herbert's poem Mattens, the final verse of which is as follows;

'Teach me they love to know;
That this new light, which now I see,
May both the work and workman show;
Then by a sunne-beam I shall climb to thee.'

The Font was exhibited at the Royal Academy in 1864. The commentator for Art Journal regarded the three works that Hughes exhibited that year as proof that he would continue to paint in a distinctive and characteristic way despite the apparent demise of the Pre-Raphaelite movement, with which Hughes had previously been closely
associated. The critic found Hughes's works exhibited there; 'each and all poetic and refined in conception, and singularly sensitive to delicate and harmonious modulations of colour.' (Art Journal, 1864, p.161)

The Font was seen by Lewis Carroll on the 2 April 1864; he noted in his diary; 'Called on Mr Arthur Hughes and saw two pictures nearly ready for the Royal Academy... a scene in church a hymn being sung.' (Roger Lancelyn Green (ed.), The Diaries of Lewis Carroll, 1953, p.212). At this time Hughes titled the picture Light from on High.

The painting was commissioned by the wine merchant John Hamilton Trist (1811-1891) of Vernon Terrace in Brighton who paid £200, a large sum which prompted Hughes to take his first trip abroad to Antwerp, Cologne, Coblenz, Nurenberg, Munich, Innsbruck, Verona and Padua. Trist became Hughes's most consistent patron
following their meeting in 1862 his purchases from Hughes included Home from Sea (Ashmolean Museum, Oxford), The King's Orchard (Fitzwilliam Museum, Cambridge) and Silver and Gold (collection of Lord Lloyd Webber) another allegory of youth and age.
Posted by Hermes at 1:00 PM

How interesting. I really like the way you concentrate on certain images and try to tease everything out of them - it is thought provoking and enlightening.

I fear I am a bit obcessed really, but these pictures are so interesting.