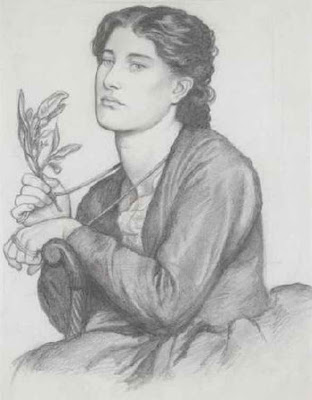 Drawn in 1862, this is one of the first and most elaborate studies of an infrequent model named Agnes (Aggie) Manetti who also posed for the contemporary drawing The Hair Net (Christie's, 14 June 2005, lot 15). George Price Boyce recorded in his diary that he had seen several drawings of Agnes in Rossetti's studio on 22 October 1862and on 18 January 1863 he made his own drawings of her. The artist's brother William Michael Rossetti described her as 'a most energetic as well as beautiful profile, not without some analogy to that of the great Napoleon'. In July 1904 William Michael wrote of Agnes, 'She was a Scotswoman in London, with a handsome pleasing face, more especially a fine profile. She was not of the "respectable" class, nor yet a regular artist's model. I forget her
surname. Her Christian name was Agnes, and she was known as 'Aggie' in my Brother's immediate circle. My Brother painted from her 2 or 3 times, and drew from her several times'. Rossetti appears to have been fond of Agnes, and even gave her an affectionate pet-name, 'Fatty Aggie'.

The Laurel belonged to the artist L.S. Lowry, whose fascination for Rossetti's work is well-known. The drawing hung at first in his front lounge and finally his bedroom when he bought other drawings by Rossetti. Although Lowry felt that the girl's mouth was rather hard, he particularly admired the hands in the drawing. Lowry wrote 'There's no-one like Rossetti... I don't care much for his subject pictures but his women are very wonderful. I can't find anything quite like them... wonderful creatures they are... unreal pictures.' (A PreRaphaelite Passion, The Private Collection of L.S.Lowry, 1977, p.3)
Posted by Hermes at 6:00 AM