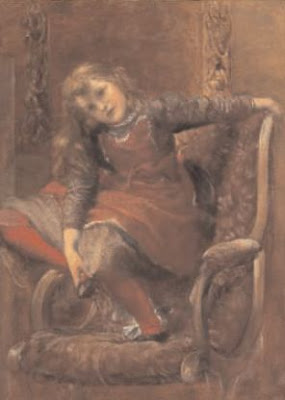 ‘This is the first portrait Mr. Watts painted of little Blanche Clogstoun, who is seated in an armchair and wears red stockings.’

Blanche Clogstoun was the orphan niece of Mr. and Mrs. Thoby Prinsep, and Watts
became her legal guardian. In 1883 she married Herbert Somers Cocks, and died in
1895. Watts rarely painted children, but in the case of Blanche Clogstoun, a child he
obviously knew well, he has produced a picture of great charm and tenderness.
Posted by Hermes at 6:00 AM