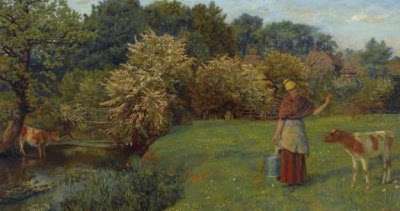 signed l.r.: ARTHUR HUGHES; inscribed with a poem and the artist's name and address on an old label attached to the reverse
oil on canvas
47 by 86cm., 18½ by 34in.

The landscape for the present work was painted in the late 1860s and in 1872 Hughes reworked the foreground with the addition of the milkmaid and the calf, probably at the request of it's first owner John Hamilton Trist. It was at this time that it was given the title, based upon a poem written in Dorset dialect by William Barnes:

'O Poll's the milk-maid o' the farm!
An' Poll's so happy out in groun',
Wi' her white pail below her earm
As if she wore a goolden crown.
In zummer mornens when the lark
Do rouse the little lad an' lass
To work, then she's the vu'st to mark
Her steps along the dewy grass'.
Posted by Hermes at 6:00 AM