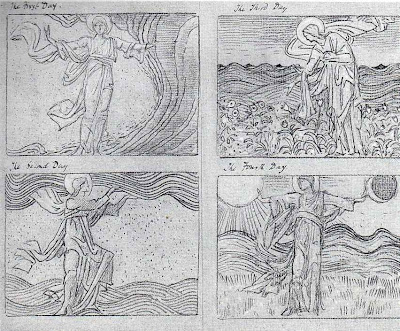 Produced for a 'Biblia Innocentium' by J W Mackail (his son in law) for whih over 200 pictures were originally planned. They were never finished and when the book was published by the Kelmscott Press in 1892 it had no illustrations. After BJ's death however 25 illustrations were found and reproduced as wood cuts with the help of Robert Catterson-Smith who had worked wuth BJ on the Kelmscott Chaucer (1896). These designs were published by Longmans in 1902 and there is a reprint of 1972.
Posted by Hermes at 6:00 AM

Very nice!
I never seen these drawings.
Thanks a lot.

I am constantly amazed at the range of BJ's work and none of it is uninteresting.