William Bell Scott - A Messenger of the New Faith: Rome AD 150 - 'What communion has light with darkness....?' 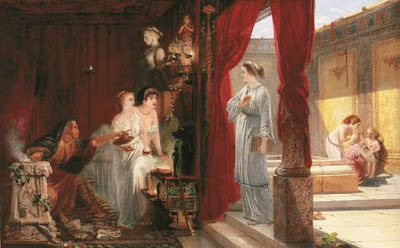 
As the inscription on the back records, the picture was painted at 33 Elgin Road, Notting Hill, Scott's address from 1864, (when he settled in London on giving up the mastership of the Government School of Design in Newcastle), to 1870, when he moved to Bellevue House, Cheyne Walk, Chelsea, to be nearer his old friend D.G. Rossetti. The painting in the Collection by Scott's mistress, Alice Boyd, also seems to have been painted in Elgin Road.

The picture shows a girl who has been converted to Christianity remonstrating with a group of pagans in Rome in AD 150. This was during the benign reign of Antoninus Pius, before the persecution of Christians had begun. The symbolic use of light in the picture - the convert bringing daylight into the darkened chamber occupied by the pagans - is very obvious, and indeed was emphasised by the quotation attached to the title when the picture was exhibited in 1868.

It is typical that Scott should be painting a classical subject in the late 1860s, a period which saw the beginnings of the late Victorian classical revival. Although the phenomenon is associated mainly with artists such as Leighton and Poynter, many of the Pre-Raphaelites were affected to a lesser degree. Parallels to Scott's flirtation with classicism can be found in the work of Millais, Rossetti, Burne-Jones and others.
Posted by Hermes at 5:00 PM

My husband and I admire Pre-Raphaelite painters and their circle of fellow painters, and I like the historical notes you supply here.