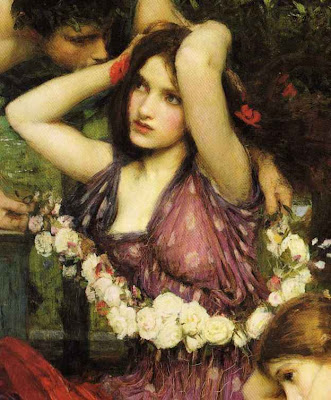 John William Waterhouse's painting Flora and the Zephyr; takes its subject from Ovid's Fasti, which is a verse chronicle of the Roman calendar, and which incorporates the mythologies and historical legends of Rome where they can he associated with specific times of the year. Fasti V, vv.195-375, spoken by Flora herself, tells the story of her abduction and marriage to Zephyr, god of the wind:

'I who now am called Flora was formerly Chloris ... a nymph of the happy fields where, as you have heard, dwelt fortunate men of old. Modesty shrinks from describing my figure; but it procured the hand of a god for my mother's daughter. 'Twas spring, and I was roaming; Zephyr caught sight of me; I retired; he pursued and I fled; but he was the stronger, and Boreas had given his brother full right of rape by daring to carry off the prize from the house of Erechtheus. However, he made amends for his violence by giving me the name of bride, and in my marriage-bed I have naught to complain of. I enjoy perpetual spring; most buxom is the year ever; ever the tree is clothed with leaves, the ground with pasture. In the fields that are my dower, I have a fruitful garden, fanned by the breeze and watered by a spring of running water. This garden my husband filled with noble flowers and said, "Goddess, be queen of flowers." Oft did I wish to count the colours in the beds, but could not; the number was past counting.' (Translated from the Latin by James George Frazer, 1951) Flora goes on to describe the different flowers she gave to the world, born from the wounds of gods and mortals, and of her power to propagate and inseminate. She speaks also of her command over the harvest and the vintage, and her gift of honey to the world. Her story ends when she is asked the question: "'Why, instead of Lybyan lionesses, are unwarlike roes and shy hares pent in thy nets?" She replied that her province was not woods, but gardens and field, where no fierce beast may come.'

Waterhouse's painting shows the moment when Zephyr first set eyes upon and fell in love with Flora, as she gathered flowers in the fields with her maidens and children. He flies down to her, accompanied by his winged companions. and captures her by casting a garland of white flowers around her.

The second half of the 1890s witnessed both J.W. Waterhouse's arrival as one of leading artists of the day, (he was elected a full academician in 1895), and his undertaking a series of his most remarkable and characteristic paintings. Flora and the Zephyrs was painted in 1897, the year following Hylas and the Nymphs (Manchester City Art Galleries), the painting by which Waterhouse is best known to a modern audience. Both Hylas and Flora were figures whose tempting beauty caused them to be lured away: the former is seen as the nymphs draw around him, enticing him into their midst so that they might draw him beneath the surface of their lily-covered pond; while Flora looks upwards with a mixture of alarm and excitement as the Zephyrs fill the branches of the grove of bay-trees with the commotion of their flight. Both Hylas and Flora face uncertain fates, and it is this sense of psychological imminence - causing the spectator to search for clues as to the dramatic outcome - which places these two particular paintings among the masterpieces of nineteenth-century Symbolist art.

Flora and the Zephyrs was exhibited at the Royal Academy in 1898 with Ariadne (private collection), which showed the sleeping figure outstretched at the moment of her abandonment by Theseus. Two years later Waterhouse showed the Awakening of Adonis, where again the main protagonist seems hardly aware of the unfolding drama. Waterhouse's paintings after the turn of the century were to become blander and more oblique in their storytelling, and seldom again did he achieve the psychological tension and sense of frenzied excitement of Flora and the Zephyrs.

The critical responses to Flora and the Zephys are very interesting. In the first instance, the painting was praised for its technical qualities and as containing the essential elements of Waterhouse's distinctive style. The Athenaeum found it 'a subject eminently suited to the mode of art that Mr J.W. Waterhouse always affects. It has afforded him an opportunity of depicting with exceptional brilliancy and splendour of colour a number of dreamy figures, such as that of the goddess. Indeed, her beautiful features are better painted, unquestionably, than anything he has done before of the same sort.' The Times, likewise, approved it as 'a delightful presentation of [the artist's) favourite colour scheme, ... which, as it is by Mr Waterhouse we need hardly say that the decorative element is conspicuous, and that the lines of the composition, make a pattern charming in all respects.' Of those who responded to the painting in 1898, The Time's critic seems to have been most alert to its psychological nuances, and refers to the sense of sexual submission on the part of Flora, for, while her companions 'are innocently gathering flowers, and their action shows that they feel the breath of spring winds(,] Flora alone does more than feel; to her is revealed the presence of the young god of the wind and of his companions who come floating through the trees, and, as Zephyr casts a girdle of roses round her form and presses his lips upon her arm, her eyes declare that she is suddenly conscious of a mystery unrevealed till now. The contrast between the conscious Flora and her unconscious maidens is what takes the picture out of the merely decorative class.' In connection with Flora and the Zephyrs. the Art Journal said of Waterhouse's painting: 'His art is to concentrate himself on the pulse of the myth, and make his whole picture throb in unison.'

Waterhouse's reinterpretation of the classical idiom was discussed by various critics, including that of The Times, who found that the painting was one 'which tells its story very perfectly and is frankly mythological without being literary'. The Athenaeum stated that the artist 'had not looked at his theme from the standpoint of ancient art'. but that the painting was instead indebted to Renaissance prototypes: 'Not only in the faces and attitudes, but in the general handling of the subject, he has clearly adopted the point of view of a designer of the early Renaissance, not quite free from Gothic influences, such, for instance, as those of Botticelli, whose "Allegory of Spring" will be suggested by Mr Waterhouse's latest work,' This same issue was explored in the Spectator, the critic of which found flora and the Zephyrs 'a work of pure delight'. but who drew the conclusion that 'so delicate an idyll cannot be described, it must be seen'. It was the critic's duty 'to point out how right the artist is in avoiding all archaic affectation of form; the natural beauty of Flora and her train convinces us of their existence, and that were we as fortunate as the painter, we, too, might have seen this grove. To paint thus is to carry out the spirit of the earl, Renaissance more truly than to construct a sham primitiveness. Why should such exquisite natural beauty as that of the central figure and of the little child running over the grass be sacrificed: Woebegone people we too often see in ideal pictures.... Mr Waterhouse ... has the secret of lyric charm, and knows something of meadows which the Venetians loved.'

She was indeed gorgeous, but modern eyes cannot help wondering about the subject matter. Even "in 1898 The Time's critic seems to have been most alert to its psychological nuances, and refers to the sense of sexual submission on the part of Flora". Sexual submission was at best ambivalent, I think. At worst it was... well, worse.

It would be interesting to know what the growing suffragette movement felt about the psychological nuances in the late 1890s.

I suspect this was a Waterhouse fantasy. Submission of pretty women seems common in his paintings. I'm not actually a big fan of his but I get a lot of requests for his work.

One of my favorite of the Waterhouse girls! I think on the subject of submission, that Waterhouse portrays women in all their naivete.

Whether the women have a lack of experience, or a lack of wisdom, and judgement is up for an interesting debate. Like anything else in the appreciation of art, it’s up to each to take this own meaning and apply his own thoughts and experiences to what he sees.

This of course applies not just to aesthetic taste, but to the interpretations of the viewer.

Could Waterhouse be portraying innocence or unsophistication, or is he commenting on how people (or the Gods) have taken advantage of this naiveté.

The lack of experience, wisdom, or judgment does not necessarily imply submission. Social commentary may have, or may not have anything to do with the love of and worship of women. Their innocence, unsophistication is not in question. The more interesting to me is whether their culpability is at question, no?

With Waterhouse in particular think of Circe and compare her to The Sorceress. What do you see, in the sense of the representation of female beauty?

Can I be contentious. To me it is a VERY young face with rather large boobs. Its interesting that say Rossetti preferred mature almost buxom sorts whereas Burne-Jones and Waterhouse liked or painted nubile youngsters.