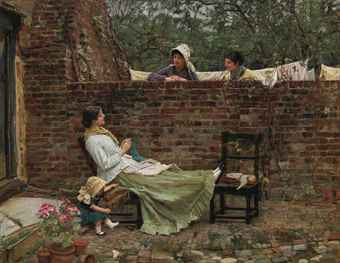 The second half of the 1880s witnessed J. W. Waterhouse's most intense interest in landscape and outdoor genre subjects, and his fascination with effects of natural light. At this time he was in close contact with a group of landscape specialists, including William Logsdail, who was a neighbour at the Primrose Hill Studios, and Frank Bramley, who Waterhouse appears to have visited in Cornwall at least once. It was perhaps through this circle that Waterhouse came to appreciate the work of Jules Bastien Lepage. The pure landscapes and figure studies that Waterhouse made in the course of painting expeditions in the English countryside, and particularly when in Italy, are adapted from the principles of the French artist, containing an Impressionistic feeling for the quality of light, but also being carefully arranged to give a pleasing and decorative pictorial effect. Close parallels can be drawn between this work and Lepage's most famous painting Jeanne d'Arc Écoutant les Voix (Metropolitan Museum of Art, New York), particularly in the depiction of the trees and the crumbling stone walls. The observation of the wall, the foliage and the moss-covered yard is meticulous and highly accomplished, whilst the gestures of the figures are convincing and sensitively studied. The attention to realistic harmony of colour and naturalistic detail is paramount in these early pictures, which were to an extent eclipsed by the idealism of the nymphs and sorceresses that increasingly dominated his work from the 1890s onwards. The early works of Waterhouse bear comparison with the best work of the Newlyn painters, particularly Langley and Forbes, with whom Waterhouse was also associated at this time. By viewing Waterhouse as an artist connected to the ideals of the Newlyn School, rather than as a follower of Burne-Jones and Leighton, it is clear to see that the aims of his early work were innovative, modern and progressive and that he was striving towards a realism which was overtaken in later years by a quest for idealised beauty.

Gossips was painted only a year after Waterhouse's great early masterpiece St Eulalia of 1884 (Tate Britain). It predates Mariamne (private collection) by two years, The Lady of Shallot (Tate Britain) by three years and the first version of Ophelia (collection of Lord Lloyd Webber) by four years. The 1880s were, without doubt, Waterhouse's most innovative years when inspired ideas germinated and memorable paintings were undertaken.