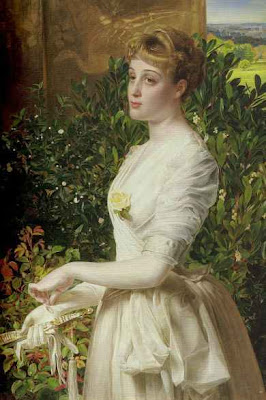 The trio came from a distinguished Connecticut family who used to visit England in the 1880's and '90s for the shooting and social life. Julia married Loftus Joseph Wigram Arkwright (1866-19501 of Parndon Hall. Essex. on 6 June 1894.

The Caldwella had some colourful connections. Julia's uncle, Jack Caldwell, was largely responsible for starting the Spanish-American war over Cuba in 1898. Due to a misunderstanding, a despatch he sent to the New York Tribune resulted in the USS Maine being sent to Havana, where the Spaniards had replaced the mooring buoy with a mine. The Maine was sunk, thus precipitating the war. Julia's niece, Diana Caldwell, was the femme fatale in the 'White Mischief' case in Kenya in 1940. Lord Errol, Diana's lover, was murdered, and her husband, Sir Delves Broughton, was tried for the murder and acquitted. There are still Caldwells living in in Stamford, Connecticut.

The painting was executed at Easton Lodge. Essex, the home of the Earl and Countess of Warwick, with whom Julia had made friends; the house has now been demolished, but the picture's background can be identified. 'Daisy' Warwick was an extravapnt eccentric who threw lavish parties at Easton and gave away diamonds as prizes. She and Julia collected stamps and are said to have been 'friendly rivals.

Sandys was an exceptionally slow and meticulous worker, and there is a letter to his daughter Winifred, still in the possession of his funily, complaining that he could 'not get more than three hours a day for sitting from Miss Caldwell' A preliminary study for the portrait is in a private collection.
Posted by Hermes at 1:00 PM