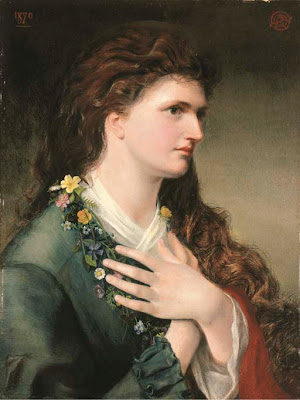 Emma Sandys was the daughter of a minor Norwich artist and the sister of a major one: Anthony Frederick Augustus Sandys (see lots 91 and 239). She was much influenced by her brother's style, and this picture is typical of the strong idealised female found in his oeuvre. It has been suggested that it may be a likeness of Daisy, daughter of Mr Jospeh Ince, exhibited at the Royal Academy in 1870, the year this picture was painted, as the sitter's fingers rest on a daisy in the garland she is wearing.
Posted by Hermes at 6:00 AM