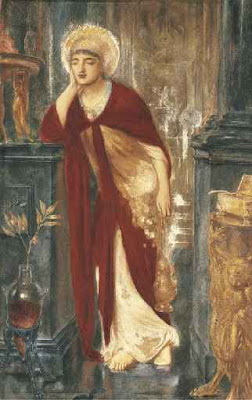 Heliogabalus was the most debauched of all the Roman emperors. Taking his name from an oriental sun god, he ascended the imperial throne in AD 218 and, according to Gibbon, 'abandoned himself in the grossest pleasures with ungoverned fury.' Within four years he had alienated the army which had brought him to power, and on 10 March AD 222 both he and his mother were assassinated by the Praeterian guards. His endearing habit of holding feasts at which his courtiers would be smothered in rose-petals was the subject of a famous painting by Alma-Tadema, exhibited at the Royal Academy in 1888 and sold in these Rooms on 11 June 1993 (lot 121).

The figure of Heliogabalus had an obvious appeal for Solomon, who was fascinated by erotic and sadistic themes. Nor is it accidental that the subject is classical, or that the emperor is seen in his role as high priest of the sun-worship that he introduced to Rome. Solomon's work in the 1860s often reflects the early development of late Victorian classicism, while he was powerfully attracted to the theme of religious ritual. Heliogabalus belongs to a long series of paintings of this period in which a good-looking young priest is seen ministering in the context of the Jewish, Greek Orthodox or Anglo-Catholic faiths.

Solomon's interest in sexual perversion was formed and encouraged by his friend A.C. Swinburne, who in 1871 published an essay on the artist in the magazine The Dark Blue. Inevitably he harped on the moral ambiguity of Heliogabalus, describing it as 'symbolic...of the lusts of the flesh and the secrets of the soul, of the kingdom of this world and the mystery of another.' Swinburne loved to raise eyebrows by indulging in this level of Aesthetic-cum-Symbolist rhetoric, but however close he sailed to the wind, he never paid the ultimate price demanded by the vengeful forces of conventional morality. Solomon, whether weaker or more honest, was certainly less fortunate. In 1873 his career collapsed when he was arrested in a public urinal and convicted of homosexual offences.

It is interesting that the picture was exhibited at the Dudley Gallery in 1868. The Gallery had held annual exhibitions of watercolours in the Egyptian Hall, Piccadilly, since 1865, and was supported by many of the younger Pre-Raphaelites and Aesthetic painters, among them not only Solomon and his friend Henry Holiday but artists like Walter Crane, Edward Clifford and Robert Bateman, who saw themselves as followers of Burne-Jones. In fact the Dudley was the chief forum for Aesthetic values before the Grosvenor Gallery opened in 1877.
Posted by Hermes at 6:00 AM