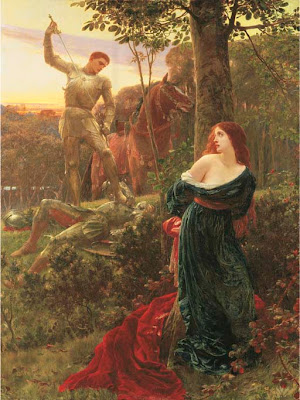 Dicksee came from a family of artists; his father, Thomas Francis Dicksee, uncle, brother and sister were all painters and exhibited at the Royal Academy. Like many other artists of the time, they lived in Bloomsbury, the bohemian quarter of the day, where Dicksee received his formal education at the Rev. George Henslow's school. After a year working with his father, he entered the Royal Academy Schools in 1870, being taught by Millais and Leighton and proving a model student who won gold and silver medals. He also had a formative period assisting Henry Holiday with stained glass.

In the 1870s and 1880s much of Dicksee's creative effort was channelled into illustration, both for magazines - Cassell's, the Cornhill, the Graphic, etc - and books, notably Longfellow's Evangeline (1882) and two editions of Shakespeare's plays (1883-92), all published by Cassell's. A number of these designs were later developed as easel paintings. Dicksee began to exhibit at the RA in 1876. It was always his spiritual home, although he also supported the Grosvenor Gallery and other institutions. His name was made with Harmony (Tate Gallery), exhibited in 1877; a winning combination of sentimental theme, 'aesthetic' decor and academic technique, it was hailed as the 'picture of the year' and became one of the first works bought for the Chantrey Bequest.

Dicksee was elected ARA in 1881 and RA ten years later. In addition to literary and historical subjects, he specialised in the relatively new genre of the psychodrama, examples being The Crisis of 1891 (Melbourne) and The Confession of 1896 (private collection). Many of his pictures were widely disseminated through engravings, and in 1900 he scored another great success with The Two Crowns (Tate Gallery), which again became a Chantrey purchase. However, the fashion for such costume pieces was waning, and increasingly he turned to portraiture and landscape. Never marrying, he settled in 1898 at 3 Greville Place in St John's Wood, then so popular with academic artists.

In later years Dicksee received many honours, both at home and abroad. The climax of his career was his election as President of the Royal Academy in 1924 in succession to Sir Aston Webb. He held the post with distinction and tact, and it brought him a knighthood in 1925 and a KCVO two years later. However, the advent of the Modern Movement, of which he was an outspoken critic, had left him an isolated figure. By the time he died, his art, once so popular, was generally dismissed as outmoded and irrelevant.

The present picture is one of his most attractive, a wonderful distillation of late Victorian romanticism at its most theatrical and uninhibited. As Mark Girouard has shown in his book The Return to Camelot (1981), the ideal of chilvalry preoccupied the Victorians. It is no accident that the concept was central to the frescoes in the new Palace of Westminster that were conceived as a great expression of national pride and sentiment. First embodied in Maclise's Spirit of Chivalry (fig. 1), painted in the House of Lords in the 1840s, the theme was taken up again in the Arthurian subjects in the Queen's Robing Room that engaged William Dyce for the last sixteen years of his life. The obvious literary parallel is Tennyson's Idylls of the King, in which the Poet Laureate retold the national epic in terms which were intended to have a direct bearing on contemporary mores. Not for nothing did Swinburne wickedly refer to the cycle of poems as the Morte d'Albert.

But chilvalry was not the preserve of national or public aspirations. It could also be the focus of the Pre-Raphaelites' essentially private response to the Middle Ages. One thinks, for example, of Rossetti's Death of Breuse sans Pitié (private collection), one of the 'Froissartian' watercolours that he painted for William Morris in the late 1850s; of Burne-Jones's St George (see lot 33) and Perseus series, executed for domestic settings a decade or more later; or of Millais' The Knight Errant, exhibited at the Royal Academy in 1870.

It was typical of Dicksee to seek to express a Pre-Raphaelite subject in terms of a lush academic style; in this respect Chivalry is a sequel to the famous Harmony of 1877, while equally looking forward to a late painting such as The End of the Quest (Leighton House, Kensington), a re-interpretation of the theme of courtly love dating from 1921. When Chivalry was exhibited in 1885, more than one critic made the comparison with Millais' Knight Errant which, perhaps significantly, had been exhibited the very year that Dicksee entered the RA Schools. Certainly the comparison is valid in so far as Millais's picture too represents an accomodation between Pre-Raphaelite sentiment and an academic idiom, including the monumental scale on which both pictures are painted. Perhaps the most obvious difference is that Millais dares to flirt with the issue, so fraught in the Victorian context, of nudity, while Dicksee opts for a safer 'off-the-shoulder' solution in which revelation is nicely balanced by concealment.

Critics often described the picture's handling and colouring as Venetian - justifiably, since Dicksee was a great admirer of Venetian painting. He visited Venice in 1882, three years before the exhibition of Chivalry, and he told his students at the RA Schools to 'revel in the joyous company of Titian and Giorgione, Tintoretto and Veronese; all their windows are open to the sunny south and a golden light pervades them'. It is tempting to link Chivalry more specifically with Tintoretto's St George and the Dragon in the National Gallery, which has distinct thematic and compositional similarities, but it would be rash to push this too far since Amanda Kavanagh has shown that Dicksee's design is developed from an earlier illustration of his own to a modern story - R.D. Blackmore's novel Emma; or My Father's Sin, published in the Cornhill Magazine in January 1877. Kavanagh also convincingly suggests that the elegant poses of the figures owe something to sculptural prototypes, citing examples by Cellini, Mercié, Alfred Gilbert and G.F. Watts.

Not only the 'Venetian' palette but the rich, soupy texture of the paint and the feeling for dramatic yet subtle lighting are typical of Dicksee's style. Crepuscular light, as here, or the warm glow of light filtering through stained-glass windows, as in Harmony, are particularly characteristic. This awareness of the possibilities of light may well have been encouraged by Dicksee's early experience of working in stained glass with Henry Holiday.

The picture was commissioned by Sir John Aird, a wealthy contractor whose career embraced the removal of the Crystal Palace to Sydenham, the completion of the Manchester Ship Canal, and the building of the great dam at Aswan, finally opened after four years labour in 1902. Aird's achievements brought him a baronetcy, a seat in Parliament and a handsome house at 14 Hyde Park Terrace, furnished with a fine collection of modern British pictures. Like F.R. Leyland, he tended to like large imposing works of obvious importance, but whereas Leyland favoured the Pre-Raphaelites and Aesthetic masters, Aird's taste was more academic. Leighton, Poynter, Orchardson, Waterhouse, Marcus Stone and Luke Fildes were represented in the collection in addition to Dicksee, whose Chivalry hung over the fireplace in the back drawing room at Hyde Park Terrace.

The two great Alma-Tademas that dominated the Aird collection, The Roses of Heliogabalus and The Finding of Moses, have both been sold at Christie's in recent years (respectively in London on 11 June 1993, lot 121, and in New York on 25 May 1995).
Posted by Hermes at 5:00 PM

It's a fun painting (I must admit I loved stuff like this when I was a kid), but it veers on kitsch. I think Dicksee is definitely missing the artistic relevance of the earlier Pre-Raphaelite painters.

I hesitated where to put this one, not my taste at all but somone loved it. I think your comment is spot on.