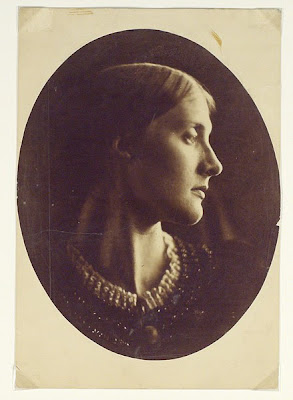 Julia Jackson was Julia Margaret Cameron's niece and goddaughter, later the mother of Virigina Woolf and Vanessa Bell. A renowned beauty who sat for G.F. Watts and Edward Burne-Jones, Jackson was one of Mrs Cameron's favourite and most photographed subjects. Cameron made numerous portraits of Jackson but none are as visually compelling as this profile where the light cast across her face and neck emphasises her strong classical features. The photograph was taken shortly before Jackson's marriage to Herbert Duckworth. Mrs Cameron did not generally use Jackson to portray religious or literary figures and narratives but rather made heroic studies of her in her own right such as this. The print has a hair, probably the photographer's, embedded between the paper and the albumen silver emulsion in the lower right section of the sheet.
Posted by Hermes at 1:00 PM

I was writing about Julia Margaret Cameron (1815-1879) a year ago and created a post at http://melbourneblogger.blogspot.com/2009/10/julia-cameron-lord-tennyson-and-isle-of.html. This year I have come back to the topic because I was interested in the social and intellectual life that got going on the Isle of Wight, once Queen Victoria put down roots there.

My big questions were: “If Julia Cameron didn’t get to the Isle of Wight till 1860, how was she so close to the PRB in her earlier decades?” And “if Julia Jackson was one of Mrs Cameron's favourite and most photographed subjects, how could Jackson have sat for G.F. Watts and Edward Burne-Jones before Cameron started photographing her regularly?”

I think I have the times lines right, finally! In 1848, the year of the formation of the Pre-Raphaelite Brotherhood, Charles Cameron retired from his job in India so that he and his wife Julia could return to England. For a time Julia Cameron and her sister Sarah Prinsep had a very nice social life in London, socialising with Millais, Rossetti, Burne-Jones and Watts. So by the time the Camerons moved permanently moved to the Isle of Wight in 1860, she was already old friends with the PRB. In fact it didn’t matter that Julia Cameron only received her first camera for her 48th birthday in 1863! Her friendship with PRB was NOT based on her photographing their world.

Julia Jackson (1846–95), who returned from India with her mother to England in 1848, was only a toddler. So it would be interesting to know how GF Watts and Edward Burne-Jones painted her in the years before 1863. Did the young girl get taken by her beloved Aunt Julia Cameron to PRB afternoon teas where she accidentally captured the painters’ attention?

What a great period this must have been.

I really like her work, though I've been tracing Hollyer's photos of the PRB lately. This is a year old but you might find it useful: