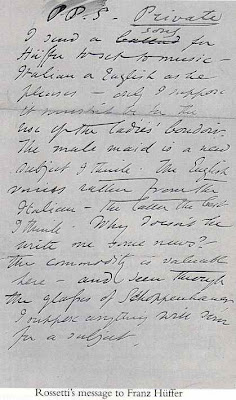 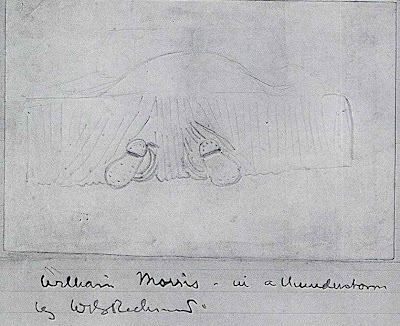 [A Collection of Letters, Photographs, Drawings and other material, mainly relating to Violet Hunt's book The life of Rossetti, 1932]

Violet Hunt (1862-1942) was the daughter of the landscape painter Alfred Wiliam Hunt (1830-1839) and the mistress of writer Ford Madox Ford (1873-1939). She made her name at the beginning of the century as the author of what then seemed 'daring' novels, and fanned gossip about her private life by publishing a volume of candid reminiscences, The Flurried Years, in 1926. But she is best known today, at least in the context of Victorian art scholarship, for her last book, a biography of Liz Siddal called The Wife of Rossetti, published in 1932. Her early life was passed on the fringes of the Pre-Raphaelite father knew Ruskin and many artists in the circle, while Ford Madox Ford was the grandson of Ford Madox Brown, his parents being Brown's daughter Catherine and her husband Dr Franz Hueffer, a distinguished music critic who had settled in England in 1869. (Ford changed his surname by deed-poll in 1919.) These connections might have made her the biographer of the hapless Lizzie, but she was motivated by a love of scandal and personal spite towards a number of her associates. The result was a sensational and unreliable account of a notoriously sensitive subject which gave much offence at the time and has rightly been regarded with a good deal of suspicion ever since. W. Graham Robertson. who was not uncharitable but did feel that reputations should he protected, wrote as follows when he heard what she was planning in 1923: I'm a good deal worried to hear that that pig of a Violet Hunt is writing one of her unpleasant books about Miss Siddal, Rossetti and Howell. She came to Mrs Allingham in search of 'spicy bits' which (if they ever existed) Mrs Allingham had of course omitted from her husband's diary when published. Mrs Allingham naturally showed her - the door - but unfortunately, as a girl, Viola Hunt was among that circle (though never of it) and does know a good many things with which the public has no concern. If she dives into the very muddy Howell waters goodness knows what she may bring up, and how she will enjoy ladling it out'. When the book was published nine year later he had to admit that it was 'a wonderful achievement. The amount of material that she has got together is simply staggering'. But it was only 'the more odious for being, in the main, true to facts. [for] the facts are distorted. She does not dare to throw her worst "stink bomb", but displays it very plainly for all who can read in an
innocent-looking footnote'. Mrs Rossetti Angeli, Rossetti's niece, was he reported. 'at boiling point since the appearance of Violet's book' (Kerrison Preston (ed.). Letters from from Graham Robertson, 1953, pp.107, 274-5, 333).

The present collection is a miscellaneous assemblage of printed and manuscript ephemera relating to the Pre-Raphaelite circle, the Hunt family. Ford Madox Ford and Violet Hunt herself. Fifteen autograph letters from Sir Anthony Hope, the author of The Prisoner of Zenda, written to her between 1894 and 1910, discuss domestic and literary matters. A letter from R.B. Cunninghame Graham (23 October 1912) comments on her prose style.

But most of the material is connected, directly or indirectly, with The Wife of Rossetti. In two letters. one dated 7 May 1924. Helen Allingham voices her concern about Violet's intentions, although they hardly bear out Robertson's colourful picture of her 'showing her the door'. Enclosed are some fragments of William Allingham's diary for January-August 1872. Margaret Rae. the daughter of the Newcastle industrialist James Leathart who had formed a fine collection of Pre-Raphaelite pictures, reminisces about her father's relations with Madox Brown and others (four letters: 8 April 1923-15 June 1924). There are copies of the death certificates of Lizzie's parents (Mrs Siddal outlived her daughter by thirty years). and Rossetti's visiting card with his Chatham Place address and an autograph message to G.P. Boyce about their model Annie Miller. This is reproduced in the book (p.192). as are many of a collection of carte de visite photographs. They include likenesses of the Rossetti brothers and their sister Christina, Holman Hunt, Millais, Woolmer, Brown, Bell Scott, Boyce, Morris, Carlyle, Ruskin, D.D. Home, Ruth Herbert (also represented by a watercolour sketch), Georgiana Burne-Jones and others.

Some of the most evocative items must have come into Violet Hunt's possession through her family connections. A sheet in D.G. Rossetti's hand, evidently part of a letter to Brown, begins: 'PPS Private I send a song for Huffer to set to music - Italian or English as he pleases - only I suppose it mustn't be for the use of the ladies' boudoir.' Brown comments in a covering letter to his son-in-law, postmarked 9 September 1872, that he doubts if 'the erotic in it is so strong as quite to preclude it from the "ladies boudoir" as he puts it.' Two other Brown manuscripts are a four-line poem:

possibly a 'reference to the death of his beloved son Oliver in November 1874; and an equally touching postcard to his daughter Cathy, written from 1 St Edmund's Terrace, his house in Regent's Park, during the last years of his life. 'Mama's rheumatism is better today. She has been kept to her room upstairs but I think will be down tomorrow. I am going on improving slowly each day ... I have not seen Mamma today because I cannot get up nor she down but I hope to see her tomorrow'. In a different vein is an amusing caricature by William Blake Richmond of William Morris hiding under a bed in a thunderstorm, comparable to the better-known images of this kind by Burne-Jones. A locked notebook is inscribed by Ruskin: 'This book was meant to contain abstracts of my old diaries. I will try to incorporate them with the one now current ... (Oxford) 6th May 73'. The book contains no such 'abstracts'. later being used as an address book by his secretary Laurence Hilliard, but some slight sketches on a tipped-in sheet may be in Ruskin's hand.

Aware that she was treating her materially cavalierly, to say the least, Violet Hunt was worried about copyright and even the possibility of libel. She approached a number of people on the subject, and their replies are here. Evelyn Waugh. whose book Rossetti: His Life and Works had appeared in 1928. confesses airily that 'I didn't ask permission from anybody for the quotations in my Rossetti book'. His postcard, dated 29 February 1932, is addressed to 'Mrs Hueffer. the name Violet had adopted and which led to an unsavoury court case when Ford's real wife sued a newspaper for referring to his mistress in this form. Violet was no alone in painting a highly-coloured picture of Rossetti in the 1930s. It was the fashion at this time. and another letter (undated) is from R.L. Megroz whose fictionalised play about the artist was staged in 1935 but had to be withdrawn when objections were raised by the Rossetti family. Most revealing of all is a series of four letters from the forger Thomas J. Wise, to whom Violet's book is dedicated. They were clearly on close terms (Wise addresses her as 'Me dear Violet'), and in a letter of 16 April 1930 we sense these two sinister characters in an unholy alliance. 'Don't you worry yourself about the letter'. Wise writes, 'but print it and say nothing. Nobody will call you to account, and if by any chance any word should be spoken, you can rely upon me to make instant peace for you.'