Thomas B. Seddon - Arabs at Prayer in the Desert 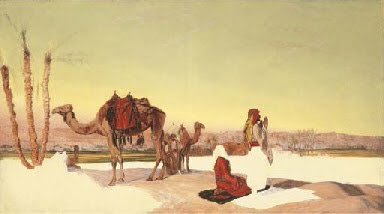 Saleroom Notice
Please note that Professor Allen Staley has kindly pointed out that this picture is mentioned in J.P. Seddon's Memoir and Letters of the late Thomas Seddon, Artist, published in London in 1858, p. 151. Having referred to the closing of the exhibition that Seddon had held in his studio from 17 March to 3 June 1855, and his marriage on 30 June, the writer continued: 'He commenced a large oil picture of "Arabs at Prayer in the Desert", and during the winter completed several of his unfinished studies, to be in readiness for the next season.'
As Professor Staley observes, this clearly contradicts the statement made in the catalogue that the picture was included in Seddon's studio exhibition; and he doubts whether in any case the artist would have shown a work in such an unfinished state.

Born in London in 1821, Seddon was the son of Thomas Seddon, a well-known cabinet-maker, and the elder brother of the architect J.P. Seddon (1827-1906). At the age of sixteen he entered his father's business, and in 1841 he went to Paris to study ornamental art. He was to remain in the furniture trade throughout the 1840s; the Society of Arts awarded him a medal for a design for a sideboard in 1848.

Seddon, however, had ambitions to become a painter. He was probably inspired by meeting Ford Madox Brown and his circle of expatriate artists in Paris, and certainly Brown became Seddon's mentor when he finally settled in England after his continental wanderings in 1846. We find Seddon studying drawing with Brown's friend Charles Lucy, who had been a pupil of Delaroche in Paris, and attending life classes at the Clipstone Street Artists Society, of which Brown was a leading light. In 1850 Seddon was working in Brown's studio, and they remained on close terms until Seddon's death in 1856.

Seddon's work took a definite turn towards landscape when he went to paint at Bettws-y-Coed, North Wales, in the summer of 1849. The following year saw him similarly employed at Barbizon. Unfortunately his work from this period is lost, so we cannot tell if it showed the influence of David Cox, the dominant presence at Bettws-y-Coed (and a definite influence on Seddon's fellow Pre-Raphaelite landscapist G.P. Boyce) or the Barbizon school. Seddon's earliest surviving picture is Léhon, from Mont Parnasse, Brittany (Museo de Arte, Ponce, Puerto Rico), exhibited at the Royal Academy in 1854, and the prevailing influence here is that of Madox Brown. Seddon had found the subject near Dinan, where he spent the summers of 1852 and 1853. He married a local girl in 1855, and for the last few years of his life the town was his second home.

In December 1850 Seddon suffered a near-fatal attack of rheumatic fever. This crisis not only finally determined him to give up cabinet-making for painting but induced a mood of religious fervour which, in part at least, led him to accompany Holman Hunt to the East in 1853-4. After an initial spell in Egypt, where they both painted the Great Sphinx at Giza, the artists arrived in Jerusalem on 3 June 1854 and Seddon embarked on his masterpiece, Jerusalem and the Valley of Jehoshaphat from the Hill of Evil Council. He left Jerusalem on 19 October, was back in Dinan by 4 November, and returned to London two months later. Hunt stayed on in the Holy Land until October 1855.

Seddon continued to work on his Eastern pictures in Dinan and London; Jerusalem and the Valley of Jehoshaphat was finally completed with the help and advice of Madox Brown. He also began new works based on sketches he had made in the East, including the present picture. 'The most important of these', Allen Staley writes in the new edition of his Pre-Raphaelite Landscape, 'was a large Arabs at Prayer in the Desert... In Cairo he had made several sketches of camels and arabs, and he borrowed details in this picture from them. The foreground camel is copied directly from the earlier Dromedary and Arabs at the City of the Dead, Cairo', a sketch completed in England and exhibited at the Royal Academy in 1856 (private collection). 'In painting a major work in the studio,' Staley continues, 'and basing it on earlier work rather than direct observation, Seddon was not following strict Pre-Raphaelite practice, and the result looks more like an Eastern subject by John Frederick Lewis than one by Holman Hunt. Indeed, he may have been inspired by Lewis's Well in the Desert (Victoria and Albert Museum), which had been exhibited at the Old Water-Colour Society in the spring of 1855, shortly before Seddon began his picture.'

If this was the case, Seddon must have worked quickly since the picture appeared in the exhibition of his works which he held in his Berners Street studio between 17 March and 3 June 1855. The exhibition was seen by Ruskin, who, according to Seddon, 'came and stayed a long time. He was very much pleased with everything...(observing) "Well, Mr S., before I saw these, I never thought it possible to attain such an effect of sun and light without sacrificing truth of colour."' Staley offers some comments on this remark and Ruskin's subsequent assessment of Seddon's work.

Seddon returned to the East in the autumn of 1856, intending (like Hunt) to paint views of the Dead Sea and (like another friend, Edward Lear) the cedars of Lebanon, but he contracted dysentry en route and died at Cairo on 23 November 1856. Arabs at Prayer in the Desert was still not finished, but, like almost everything else in his studio, it was probably included in the memorial exhibition which friends arranged at the Society of Arts in 1857.
Posted by Hermes at 5:00 PM

Thank you for all of this information - what an interesting painting, and such a fascinating history!

I was just glad to find this, as I have neglected his works so far.