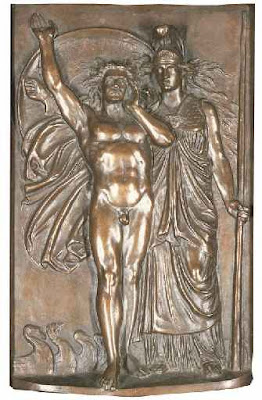 Achilles Shouting from the Trenches was originally conceived as the centre panel of a triptych, depicting scenes from The Iliad, to decorate the plinth supporting the bust of William Ewart Gladstone (Ashmolean Museum; Oxford), which was commissioned by a group of subscribers, and was originally placed in the Bodleian Library, Oxford. He carved a marble version of the same subject, which was exhibited at the Royal Academy in 1876 (no. 1417) and deposited by him as his Diploma Work. A second marble, now in Christchurch Mansion, Ipswich, was carved for his patron Charles Jenner.

We are grateful to Peyton Skipwith at The Fine Art Society for his help in preparing this entry.
Posted by Hermes at 1:00 PM