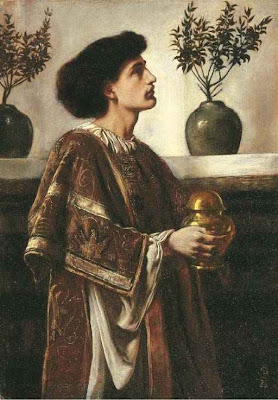 Another of Solomon's sacerdotal subjects of the 1860s. This time the context is Anglo-Catholic. Like his friend Walter Pater, Solomon was fascinated by High Church and Roman Catholic practice and ritual. In later life, an outcast from society following his arrest for 'gross indecency' in 1873, he was to find shelter and consolation at the Carmelite Church in Church Street, Kensington.
Posted by Hermes at 6:00 AM