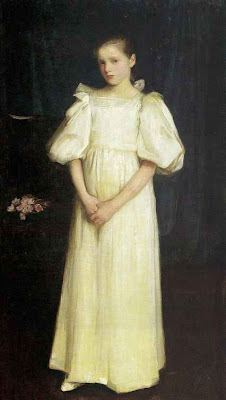 Commissioned by the sitter's father. Sir Ernest Waterlow, and thence by descent to the present owner

The decline of the Victorian passion for literary,and historical subjects in the 1890s led many artists who had specialised in them to move into the more lucrative field of portraiture. The trend is discernible even in the career of such a well established artist as Burne-Jones, who saw his last major subject picture, Love Leading the Pilgrim (Tate Gallery). return to the studio unsold when it was exhibited at the New Gallery in 1897. But the artists chiefly concerned belonged to the next generanon - Fildes, Herkomer, Waterhouse, Dicksee, and others. Waterhouse exhibited his first portrait, a likeness of Mrs Charles Newton-Robinson, at the Royal Academy of 1894, and from then until his death they accounted for a siwifficant proportion of his oevure, although he continued to paint subjects from literature and mythology in his academic adaptation of the Pre-Raphaelite style. Many of his sitters were the women of the Henderson family which patronised him so extensively during his later years.

This picture appeared at the RA a year later than Mrs Newton-Robinson. The subject was the younger daughter of the landscape painter Ernest Albert Waterlow (1850-1919), an almost exact contemporary of Waterhouse and a friend since the early 1870s when they had been fellow students at the Royal Academy Schools. They exhibited at the RA throughout their careers, became Associates and Academicians within a few years of one another, and were both members of the Arts Club in Dover Street. When Waterhouse moved house in 1893, he used Waterhouse's Primrose Hill studio to finish his RA exhibit and gave the address in the catalogue.

Waterlow had all his family painted by well known artists of the day. He himself sat to Alma-Tadema, his mother to Arthur Hacker his wife to William Holyoake, and his elder daughter, Elsa, to A.S. Cope. Phillis had already been drawn in pastel by Marianne Stokes when she sat for the present portrait, which seems to have completed the series. It is undoubtedly one of Waterhouse's best, conveying with great economy of means the fragile personality of a girl at the 'awkward age', standing self consciously in what is. perhaps, her first 'grown up' dress.

Such a touching evocation of teenage gauchness could hardly fail to make is mark with contemporary critics. F.G. Stephens, reviewing the RA exhibition in the Athenaeum, wrote: 'A pretty and tasteful portrait of a child in white, standing against a blue curtain. is, though rather rough, very sweet and true'. A.L. Baldry went further when describing the Waterlow collection in the Studio four years later. Of all the family portraits, he wrote, this was 'the most delightful, and the most persuasive by its beauty of treatment and exquisite appreciation of character ... it is marked ... by a sense of the grace and delicacy of childhood and by a knowledge of youthful individuality that hardly any other painter of our times can be said to possess. Not the least of the merits of the picture is its perfect simplicity ... [It) can, without any exaggeration of praise. be called a masterpiece'. It must have been partly on the strength of this portrait that Waterhouse was elected a full Academician in 1895.

For all the picture's psychological insight, there are no echoes here of Sargent. The whole object of Waterhouse's portraiture was to present a quiet, reflective picture of femininity in keeping with his particular brand of late Pre-Raphaelitism. It is as if he consciously presents an alternative to Sargent's brio and sophistication, leaving J.J. Shannon and his like to follow this line; and no doubt it was precisely his sober yet romantic approach that appealed to the Hendersons and others who went to him as sitters.

On the other hand, the picture does seem to cast a glance at Sargent's fellow American, Whistler, both in its conception as a little white girl', an image Whistler had defined so memorably as long ago as the 1860s, and in its evocation of the vulnerability of childhood, a theme that Whistler repeatedly explored in his later portraiture. Yet the influence of Whistler need not be overstressed. By the mid 1890s the virginal figure in white had become something of a cliche in international Symbolist painting and Waterhouse's contribution to the genre has many parallells. In England the supreme example is Burne-Jones portrait of Lady Windsor (private collection), in which this leading 'Soul', clad in a simple white dress which she can seldom have worn in real life, is seen standing in a mysterious marble hall. It is at least worth noting that this extraordinary image, the ultimate Symbolist portrait and pictorial critique of Sargentian values, was exhibited at the New Gallery in 1895, the came year that Waterhouse showed this picture at the Academy. However, although Lady Windsor had been on the easel for some years, there is no evidence to suggest that Waterhouse had seen it before it appeared in public.

Such exquisite work,
love the delicate feel..
a wonderful post about one of my favourite pre-raphaelite
artists..

Thank you.This is such a lovely work.