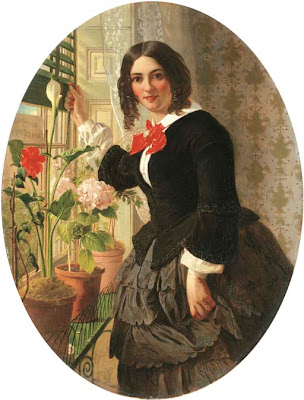 Collinson was one of the seven founder members of the Pre-Raphaelite Brotherhood, and this is perhaps his best known picture. Though dextrous and with a brilliant finish it shows little intellectual Pre-Raphaelite purpose however, and presents instead as an exemplary, if ambiguous, piece of Victorian domestic genre, much in the manner of William Powell Frith. A married lady draws a Venetian blind to reveal a sign in the window offering furnished appartments 'To Let'. However, the relationship of the title to the contents of the painting is not immediately obvious, and as the Art Journal commented, 'the point of the title is not very clear'. The picture has always been open to diverse interpretation. When lent to an exhibition at the Leicester Galleries eighty years after it was painted, along with its pendant For Sale, a smaller version of which is offered as the following lot in this sale, the critic of the Times observed: 'There are hints ... in the pair of pictures For Sale and To Let by James Collinson ... that some Victorian artists had pretty shrewd notions about comparative iniquity'. Would a Victorian audience, alert to the 'language of flowers' and the pots containing a lily and a 'Bleeding Heart', have interpreted the subject as a variation of Mr Pickwick's amorous landlady, Mrs Bardell, as popularized by Dickens? The extent to which Collinson was attempting a double-entendre, or any moral purpose, is unclear.

Born in Mansfield, the son of a bookseller, Collinson entered the Royal Academy Schools and exhibited there for the first time in 1847. The attention to detail in The Charity Boy's Debut, so impressed Rossetti that he pronounced Collinson 'a born stunner' and invited him to join the Brotherhood. Collinson later became engaged to Rossetti's poet sister Christina, but she broke it off prior to his return to the Catholic faith, and his entry to Stoneyhurst in 1850. Having been nicknamed 'the doormouse' by fellow members of the P.R.B., and teased by Hunt for needing 'to be waked up at the conclusion of the noisy evenings to receive our salutations', Collinson resigned his membership on the grounds that he could not 'as a Catholic, assist in spreading the artistic opinions of those who were not'. Collinson failed to complete his novitiate, and left the monastery and resumed painting in 1854. He later married the sister-in-law of another Catholic convert, John Rogers Herbert. Between 1847 and 1870 he exhibited seventeen paintings at the Royal Academy and also contributed to the Society of British Artists where he was secretary from 1861 to 1870, and the British Institution. Though principally resident in London, he made frequent visits to Brittany where his son Robert was a seminarian, and it was there that he executed a painting of The Holy Family.

Well known through engravings, a smaller version of this picture exists in the Graves Art Gallery, Sheffield.
Posted by Hermes at 1:00 PM

I Like this content .I got alot of information after reading this.I found another site related to this content please check the link given below thanks.
http://www.furnishedseattlerentals.com/