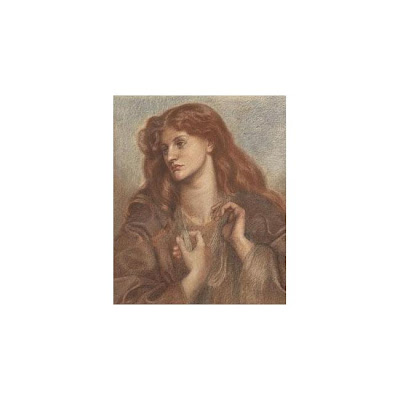 This large and finely finished drawing shows the model Alexa Wilding, head turned to the side and with her wonderful golden brown hair falling over her shoulders. Her hands are raised and she loosely holds the strands of a necklace. The mood of the drawing is wistful and distracted; the model gazes into an unseen distance, but appears to be absorbed in thoughts which are neither indicated nor explained. As is often the case with paintings and drawings which are products of the English Aesthetic movement, the spectator is permitted to explore the face and figure of this beautiful girl, but is allowed no sense of her response or indication of her awareness that she is the subject of the work of art. Aesthetic figure drawings of this type are closed against any definite psychological interpretation, their protagonists apparently occupying an hermetic limbo of unfulfilled yearning. They work upon the imagination by causing the spectator to attempt to fathom the subject's state of mind, but by remaining perpetually unresolved, operate by simultaneously intriguing, frustrating, and delighting. Of all Aesthetic artists, Rossetti was the most adept and sophisticated in his manipulation of mood in his figure compositions, always beguiling the spectator to want to know more about the painted or drawn figure and never allowing the imagery to become course or overblown.

The drawing was almost certainly undertaken as an exercise in its own right, and although its early history is not known, is likely to have been sold by Rossetti to one of the circle of collectors who in the 1870s particularly prized his elaborate chalk drawings of female models. Without being in any sense a preparatory sketch, nonetheless it relates to Rossetti's 1874 oil The Damsel of the Sanct Grael (private collection; see Virginia Surtees, Dante Gabriel Rossetti 1828-1882 - The Paintings and Drawings - A Catalogue Raisonné, two volumes, Oxford, 1971, cat. no.91.R.1; Alicia Craig Faxon, Dante Gabriel Rossetti, Oxford, 1989, pl.8). In this return to Arthurian legend on Rossetti's part, he placed the figure of Alexa Wilding at the centre of the composition, with flowing hair, face and shoulders as we see them in the drawing. The painting is completed by the placing of the Holy Dove holding a censer in its beak, above the figure's head, and the introduction of a mass of vine leaves around the composition's lower edges. If the drawing came first, which seems likely, Rossetti adapted the figure's stance in the oil painting by rearranging the hands to hold the sacred chalice and to give the gesture of benediction. With the oil, which first belonged to the Birkenhead collector George Rae, Rossetti was returning to a subject that he had previously treated in 1857, in a watercolour now in the Tate Gallery. The oil version of The Damsel of the Sanct Grael is dated 1874, and is referred to in a letter that Rossetti wrote to Thomas Gordon Hake on 20 December 1874 (see Oswald Doughty and J.R. Wahl (eds), Letters of Dante Gabriel Rossetti, four volumes, Oxford, 1967, III, pp.1324-6) as having recently been painted.

Although Rossetti had fallen in love with and had sexual relations with a number of his models - notably Fanny Cornforth and Jane Morris - his relationship with Alexa Wilding, who was the inspiration for a succession of his most successful paintings over a period of about fifteen years, was free of emotional or physical complications. Henry Treffry Dunn recalled how Rossetti had first caught sight of her in The Strand in 1865: `Walking quietly along amongst the hurrying folk that thronged the pavement he became aware of a young girl by his side. He turned his head to look at her and was struck with her beautiful face and golden auburn hair. It was the very type of face he had been seeking so long. She passed him and got mixed up in the crowd in front. Rossetti followed her for a considerable distance before he could well get up with her. At last she turned down an almost deserted by-street. Rossetti did likewise and presently overtook his Quest. With some amount of nervousness ... he spoke to her, and explained that he was an artist and was painting a picture and her face was the very one that he required for the subject he was at work on, begging her to come to his studio and give him a sitting for the same, assuring her she should be amply remunerated' (for this and following quotations from Dunn's memoir, see Recollections of Dante Gabriel Rossetti & his Circle - or - Cheyne Walk Life, edited by Rosalie Mander, Westerham, 1984, pp.45-6). On the first occasion that she was expected to come to Rossetti's studio, she did not appear. `This was a terrible disappointment to him, her face being so beautiful and so suitable for the subject.' However, about a year later he again spotted her in the street, and on this occasion succeeded in persuading her to visit him in Cheyne Walk. Alexa was a simple but perfectly respectable girl, the daughter of a piano-maker, and to whom the thought of modelling to an artist was quite new: `To find that by simply sitting still in a comfortable room for an afternoon she could earn more money than a week's work at her ordinary occupation of dress-making would bring was a great surprise to her. With very little persuasion [but after the formality of gaining her mother's permission that she should become a model to Rossetti] she gave up her situation and at a liberal arrangement sat to him entirely.' For a number of years in the late 1860s and 1870s Rossetti paid Alexa a retainer of £2 a week to be available to sit for him, and not to work for other artists (although, Rossetti's friend George Price Boyce was on occasions allowed also to draw her).

Dunn described Alexa as having `a lovely face, beautifully moulded in every feature, full of quiescent, soft, mystical repose that suited some of [Rossetti's] conceptions admirably'. This description gives a sense of an undemonstrative, perhaps even evasive, personality, content to be admired for her physical beauty but not requiring intellectual or emotional exchange. Nonetheless, she had, according to Dunn, `a deep well of affection within her seemingly placid exterior', and her loyalty to Rossetti in the sad last years of his life was remembered. Alexa Wilding was the model for, among other notable paintings, Venus Verticordia (Russel-Cotes Art Gallery, Bournemouth), of 1864-8; one of the series of works entitled Regina Cordium (Glasgow Art Gallery and Museum), of 1866; Sibylla Palmifera (Lady Lever Art Gallery, Port Sunlight), of 1866-70; and the figure of the Damozel in The Blessed Damozel (Fogg Museum of Art, Cambridge, Mass). This last, although not painted until much later, was said to be the composition that Rossetti had in mind when first he met Alexa. Perhaps the most remarkable testament to Alexa Wilding's beauty, and her role as muse to Rossetti, was La Ghirlandata, of which the oil version is in the Guildhall Art Gallery.

In the spring and summer of 1873 Alexa Wilding made a number of visits to Rossetti at Kelmscott Manor in Oxfordshire (where he lived on and off for three years in joint-tenancy with William Morris, and which was the setting for his love affair with Jane Morris). This was principally to model for La Ghirlandata, as Rossetti described in letters to various correspondents in the period (for example, on 1 July, when he wrote to Dunn: `My picture from A.W. goes on swimmingly ... and will be the best I have done of her. She sits well ...' (Doughty and Wahl 1967, III, p.1186)). It is likely that it was during this last peaceful period at Kelmscott (the tenancy was given up in 1874) that the present drawing was made.