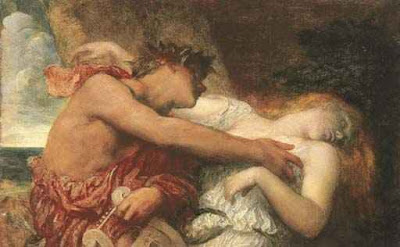 The son of Apollo and the muse Calliope, Orpheus was a Thracian poet who played the lyre so skilfully that even wild beasts were entranced. He married Eurydice, a wood nymph, but the marriage was not blessed with happiness. Bitten by a snake as she fled the advances of a lusty shepherd, Eurydice died, and Orpheus determined to seek her in Hades. He pleaded with Pluto and Proserpine, the deities of the underworld, for her release, accompanying his words with strains on the lyre so sweet that all who heard shed tears. The gods relented and allowed Eurydice to follow her husband on the condition that he did not look back during their journey. The temptation, however, was too great; just as they were reaching the upper world, Orpheus turned to look at Eurydice and she was snatched back into the shades.

This is one of Watts's most famous compositions, known in many versions. The picture was exhibited at the Royal Academy in 1869 (the same year as Poynter's Prodigal's Return, lot 29), and seems to have been the first version he completed. Others were shown at the Dudley Gallery in 1872 and the Grosvenor Gallery in 1879, and he continued to paint versions almost until his death.

Watts would often become obsessed with a composition in this way, returning to it time and again to reinterpret it in the light of some new inspiration. In the case of Orpheus and Eurydice, some versions, like the present one and the example in the Fogg Art Museum at Harvard, are landscape-shaped paintings with half-length figures, but others, including those in the Aberdeen Art Gallery (the 1879 Grosvenor version) and the Watts Gallery at Compton, are vertical canvases in which the figures are seen full-length. Details also vary; Orpheus's right hand strays from Eurydice's breast (as in the present picture) to her shoulder or her waist, while in some upright versions his lyre becomes a lute which has dropped to the ground.

The constant in all these versions, and what clearly drew Watts back to the subject so often, is the relationship of the two figures and their spiral movement as they turn or fall back into space. The motif of two interrelated bodies always fascinated Watts, and there are many other examples: The Good Samaritan, Paulo and Francesca, Jacob and Esau, Love and Death, Love and Life, and so on. As for figures in violent contraposto, one has only to recall the well-known bust Clytie, conceived about 1867, to realise how this image captured his imagination. In Orpheus and Eurydice the two favourite pictorial ideas are combined.

The picture was bought by Mrs Percy Wyndham (1835-1920). She and her family were leading lights in the social set known as the 'Souls', and great patrons and friends of artists. The Wyndhams' most conspicuous act of patronage was to commission Philip Webb to build them a country house, 'Clouds', in Wiltshire in the early 1880s, but Leighton executed murals for their London house, 44 Belgrave Square, Watts painted Mrs Wyndham's portrait, and Sargeant painted the three Wyndham sisters in one of his most bravura performances, exhibited at the R.A. in 1900. Burne-Jones, too, was a close friend, and the family owned many of his works.

Watts's portrait of Mrs Wyndham, one of his finest, was begun in the spring of 1867, finished in 1870, and shown at the first exhibition at the Grosvenor Gallery in 1877. Presumably she saw Orpheus and Euridice in his studio when she came for sittings. Since the picture was not finished when she agreed to buy it, he charged her only 200 guineas, 50 guineas less than he would have asked for it at the R.A..

The picture was enthusiastically received when it appeared at Burlington House, where the R.A. was holding its summer exhibition for the first time this year. F.G. Stephens, writing in the Athenaeum, described it as 'a painted poem' which he 'coveted' more than any of Watts's contributions. The Times thought the drawing 'careless', but found the picture 'exquisite in colour and full of the passion that befits the subject'. As for the Art Journal, it went into ecstasies over this 'lovely and rapturous composition...The forms are of noble type, the action is grand, even tragic. The work may be quoted as a striking example of how greatness may be made compatible with a small scale'.

Orpheus and Eurydice was described by Mrs Russell Barrington in her Reminicences of the artist as follows: 'This picture was painted some years ago, but it has been nearly repainted since it was exhibited in France and in the Grosvenor Gallery, in 1882, the object in so doing being to get rid of everything approaching to black in the colouring.' The French exhibition has not been identified.

The subject of Orpheus appealed strongly to artists of the Symbolist period, who saw his head still singing after death as a metaphor for the immortality of art. In France the theme inspired a famous painting by Gustave Moreau, exhibited at the Salon in 1866 (Musée d'Orsay, Paris), and it was subsequently treated by Puvis de Chavannes, Odilon Redon, and others. In England its exponents included not only Watts but Leighton, Burne-Jones, J.W. Waterhouse and Charles Ricketts. Burne-Jones used it to decorate the 'Orpheus' piano which he designed and painted for Willian Graham's daughter, Frances (another prominent 'Soul') in 1879-80. Two drawings related to this project were sold in these Rooms on 7 June 2001, lot 24-5.

The proceeds from the sale of this painting will be given by the Forbes family to aid the restoration of the Watts Gallery, Compton.
Posted by Hermes at 6:00 AM