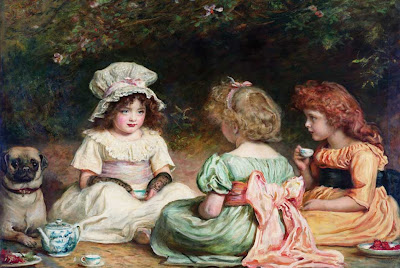 WINNIPEG.- The Winnipeg Art Gallery announced the acquisition through gift of one of the finest paintings created by Sir John Everett Millais, a leading 19th century British artist. The large canvas entitled , Afternoon Tea (or The Gossips) and dating to 1889, was donated by the Honourable Douglas Everett of Winnipeg and his family in memory of his wife Patricia Everett. The painting was adjudged by the Canadian Cultural Property Review Board as being of “outstanding significance and national importance,” with a value of $2.75 million. This extraordinary donation is one of the larges gifts of an individual artwork to the WAG in its 98-year history.

The painting will be unveiled at the WAG’s Annual General Meeting at 7pm, Wednesday, September 22. It will be on view in Gallery 2, one of the six galleries devoted to the long-term display of works from the permanent collection.

“There are only a handful of paintings by Millais in Canadian collections, including those works in the National Gallery of Canada, the Montreal Museum of Fine Art, and the Art Gallery of Ontario,” says WAG Director Dr. Stephen Borys, “so this is a real coup for the WAG.” Borys notes: “Afternoon Tea was one of the few, and certainly the largest, genre paintings by Millais to remain in private hands. For the WAG to acquire it is absolutely wonderful, and we are very grateful to the Everett family for their generous gift to the Gallery and the larger museum community.”

The WAG also owns several ink drawings by Millais, originally part of a sketch book, now rebound in an album.

The exceptional talent of John Everett Millais 1829–1896 (no relation) won him a place at the Royal Academy Schools at the unprecedented age of eleven. While there he met William Holman Hunt and Dante Gabriel Rossetti, with whom he founded the Pre-Raphaelite Brotherhood in 1848. Millais has been called “the presiding artistic genius of his age.” He quickly achieved popular success, not only as a painter but also as a book illustrator, particularly for the works of Anthony Trollope and the poems of Alfred Tennyson. By 1853, Millais had been elected an associate member of the Royal Academy of Arts, and was later elected as full member. He was awarded the title baronet in 1885, and succeeded Frederic Lord Leighton as President of the Royal Academy in 1896.

Afternoon Tea presents a captivating image of childhood-infectious and delightful-with an immediacy of impact, painted with great vivacity. It is the epitome of style that evolved over the last 20 years of Millais’ career, touching on a theme that is consistent throughout his entire career. As with many of his works, the artist endeavored to embrace the broadest possible audience in his celebration of the art of art’s sake aesthetic. Over a century later, the picture is now accessible to a new generation of audiences.