John William Waterhouse - Study for the Lady of Shalott 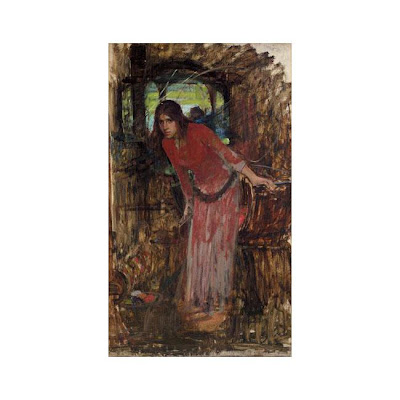 The name of John William Waterhouse is perhaps as synonymous with The Lady of Shallot as Alfred Tennyson, whose epic poem was the stimulus for so many depictions of the fated heroine imprisoned and cursed; damned for an unspecified crime of the heart and consumed with unrequited love. Although other artists such as Byam-Shaw, Arthur Hughes, Sidney Harold Meteyard, William Maw Egley and Dante Gabreil Rossetti, depicted the Lady of Shallot, it was Waterhouse and William Holman Hunt who painted the most memorable canvases, which are now icons of Victorian art.

Waterhouse had first painted Tennyson's damned lady in the canvas of 1888 which is now so well-known on the walls of Tate Britain and is certainly one of the most famous and well-loved of all Victorian Pictures. The Tate version depicts the moment described in part IV of the poem, which proceeds the moment depicted in the present picture:
'And at the closing of the day
She loosed the chain, and down she lay;
The broad stream bore her far away,
The Lady of Shalott.'

Waterhouse felt an immense attraction to The Lady of Shalott in much the same way that Rossetti connected himself to the story of Dante's romance for Beatrice and Burne-Jones associated himself with the court of King Arthur. In The Lady of Shalott, Waterhouse found the ideal figure of tragedy and romance, for his sensitive yet dramatic conception of event and emotion. Vulnerable, beautiful and consigned to the fact that she will die for love, she is the archetypical Princess imprisoned in the tower, a kind of medieval Andromeda or Andromache, bound by circumstances beyond their control but stoic until the end.

It is certainly not the case that Waterhouse returned time and time again to the subject merely to try to recapture the popularity he had gained with his 1888 canvas Waterhouse simply felt so stimulated by Tennyson's words and recognised that the poem contained more depth and drama than could be captured in one painting. Never returning to the same moment, Waterhouse selected the most significant and pictorially rich incidents from the poem, each picture being startlingly unique from the one before it. As late as 1916 he painted his last of the series 'I am Half-Sick of Shadows', Said The Lady of Shalott' (Art Gallery of Ontario, Toronto) depicting part of the narrative which preceeds all other canvases of the subject.

The present picture is a study for Waterhouse' well-known second painting 'The Lady of Shallot' which was inspired by the climax of the tale, completed in 1894 (Leeds City Art Gallery) as depicted by William Holman Hunt in his canvas now in the Wadsworth Atheneum in Hartford. Any artist attempting to paint this moment could not have helped but be inspired by Hunt's version, but Waterhouse also managed to instill his own personal approach to art in his canvas. Less constrained by claustrophobic detail, Waterhouse's Lady is more human in her reactions and appearance and the overall effect is less staged and artificial. Waterhouse's picture captures more of the spirit of the maiden's awakening intended by Tennyson 'the new born-love for something, for someone in the wide world from which she has been so long secluded, takes her out of the region of shadows into that of realities.' (Hallam Tennyson, Alfred, Lord Tennyson, A Memoir by His Son, New York, 1897, pg. 117)

It would seem that Waterhouse's sketch was the first canvas begun in preparation for the Leeds picture and contains much of the movement and drama which is lost in the finished painting, the paint applied with an energy and expression which is astounding considering the date of the picture.

Sketchbook drawings prove that this picture preceeds another oil sketch (Falmouth Art Gallery) in which the mirror is a different shape to the one found in the initial pencil sketches and this study, becoming rather conventionally rounded, harking back to Hunt's famous canvas. Hobson suggested that Waterhouse' initial inclusion of a rectangular mirror was a significant desire on the part of the artist not to duplicate Hunt's composition and it is unfortunate that he later changed his mind. The Falmouth picture is also a little more restrained and prettified, loosing much of the tension which makes this sketch so incredibly powerful and engaging.

The pose of the woman derives from Waterhouse's earlier painting of melodrama 'Consulting the Oracle' in which the soothsayer has a similar expression of enquiry and anxiety. She stands gazing out of the pictorial space and we, as the viewer, take the role of Lancelot upon whom the Lady's gaze is absorbed. She is only barely aware of the threads of her tapestry loom which have been brought to life by the curse which forbid her to look from the window, and whirl around her in terrifying loops. The mirror, through which she was able to view the world has already cracked and her fate is sealed but she is blissfully unaware. She sees and hears nothing but Lancelot joyfully singing in the marshes around her island-prison, so strong is her desire for this man she will never meet.

A photograph showing Waterhouse working upon this sketch in the early stages of its genesis shows how fond he was of the subject, choosing this picture from all the others to be placed upon the easle in this formal portrait photograph.

In 1894, the year that the finished canvas of 'The Lady of Shalott' was exhibited to great acclaim at the Royal Academy, a contemporary critic wrote of Waterhouse's position as an artist; 'a place which he shares with no one else. He has the reputation of being an innovator of judicious and well-balanced views; he is, with justice, given by the popular voice a position among the most capable of his profession... one of the rarest types of modern artists...who, having had a past, has still left a future.' (Hobson, 1989, pg 53)
Posted by Hermes at 5:00 PM

What a lovely sketch. It definitely does have some drama that is missing from the final version. By the way, I've restarted the Art History Carnival, and I would love to have a post from you! The deadline for submissions is August 30th. I'd love to include any of your recent posts - pick a favorite! (I think this would be a good one! Who doesn't love the Lady of Shalott?).