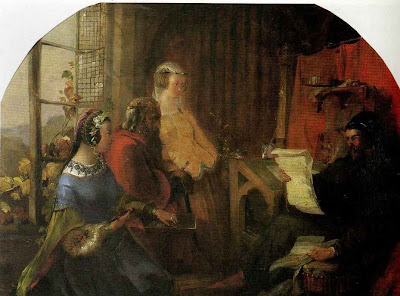 [Chaucer reading his Poem of 'The Flower and the Leaf' to his Friend and Patron, John of Gaunt, and the two Sisters, Catherine and Philippa, their Wives]

This was the first picture by Scott to appear at the Royal Academy. although he had shown at the Royal Scottish Academy where the picture was re-exhibited the following year, since 1833.

Geoffery Chaucer (1340?-1400) married Philippa, daughter of Sir Payne Roet; she was a lady of the chamber to Queen Philippa, wife of Edward III, and the marriage had taken place by 1366. Her sister Catherine Ssvynford was the mistress to Chaucer's patron, John of Gaunt, Duke of Lancaster (1340-1399), and became his third wife in 1396.

In the nineteenth century The Flower and the Leaf was a much admired feature of the Chaucer canon, but the poem was omitted from Professor Skeet's definitive edition of 1894, and is no longer regarded as authentic.

The picture anticipates Ford Madox Brown's early masterpiece Geoffrey Chaucer reading the "Legend of Constance" to Edward II and his Court(Art Gallery of New South Wales, Sydney), which was planned in 1845 and exhibited at the Royal Academy in1851. Philippa Chaucer, Catherine Swynford and John of Gaunt all appear here too.

However, it is unlikely that Brown had seen Scott's picture when he concieved his own since he was living in Paris when it was exhibited at the Royal Academy in 1842, and the two artists do not seem to have met until the early 1830s. The correspondance between their subjects should rather be attributed to the fact that they were each working within the context of the revival of history painting in the 1840s occasioned by the Westminster Hall competitions, which they both entered.


http://www.everypoet.com/archive/poetry/Geoffrey_Chaucer/chaucer_poems_THE_FLOWER_AND_THE_LEAF.htm
Posted by Hermes at 1:00 PM