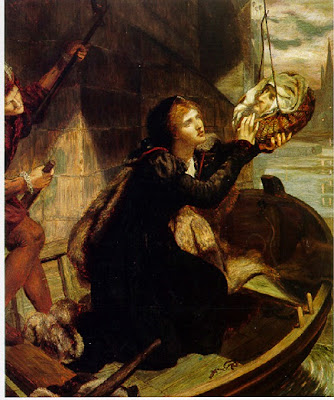 Lucy was the oldest of Ford Madox Brown's three surviving children of his first marriage. She later married William Rossetti. After becoming a mother, she painted only rarely; however, she was active politically in the cause of women's suffrage.

A label on the back of the painting describes this scene: "Margaret Roper by night stealthily removes the head of her father Sir Thomas More from London Bridge, A.D. 1534." Lord Chancellor More was executed for refusing to support Henry VIII's divorce, and so in accord with custom, his severed head was placed on a spike at the entrance to London Bridge. His daughter Margaret removed it for Christian burian, an act of courage and filial honor that, together with her reputation for learning, elevated her into histories of "famous women" popular in the 19th century. Had she been caught removing the head, she too could have been charged with treason.