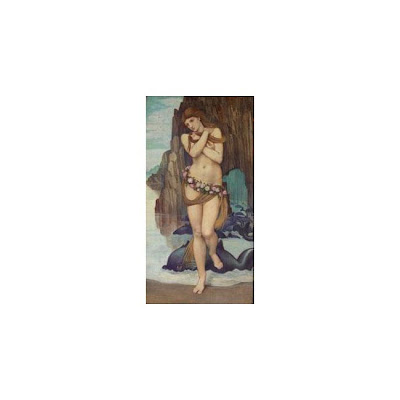 signed with the artist's name and address on the remnants of an old label on the reverse
tempera on panel
56 by 30½cm., 22 by 12in

John Roddam Spencer-Stanhope was born of aristocratic parentage, his maternal grandfather being the agricultural reformist Thomas Coke, the Earl of Leicester, known as 'Coke of Norfolk'. Educated at Rugby and Christ Church in Oxford, Stanhope was primed for a life perceived to be better-suited to his birth than that of an artist. However, the young man rejected his parents' protests and after an introduction to George Frederick Watts by his tutor at Oxford, became his pupil, accompanying him on his travels to Italy in 1853 and to Greece in 1856-7. However, Watts was a dull tutor believing that his pupil should study nothing but nature (and the Elgin Marbles) and Stanhope fell under the spell of more charismatic members of Watt's circle, Burne-Jones and Rossetti, with whom he collaborated on the ill-fated but seminal project to decorate the Oxford Union in 1857. Although four years younger than Stanhope, Burne-Jones' critical encouragement influenced the development of the young artist's style based upon his close study of Italian painting. Stanhope was accepted amongst the circle, who saw in him a great talent. Burne-Jones explained years later to Thomas Matthews Rooke, his studio assistant, 'colour was beyond any the finest in Europe; an extraordinary turn for landscape he had too - quite individual. Rossetti was in a perfect state of enthusiasm about it'.

After a period of ill-health, which often troubled the fragile artist, Stanhope settled at the idyllic Villa Nutti in the small town of Bellosguardo outside Florence, where he remained for the rest of his life. The Villa Nutti became a sanctuary for many artists of Stanhope's circle, who enjoyed the beautiful Florentine countryside and the opportunity to inbibe the local air, wine and the Florentine heritage rich in inspiring art and architecture. One of the regular visitors to the Villa Nutti was Stanhope's neice, Evelyn deMorgan (nee Pickering) whose similar approach to art owed much to her uncle's enthusiasm for the Renaissance painters. The spirit of Italy is embodied in almost every work by Stanhope in his maturity and his interpretations were both intelligent and beautiful in every detail.

After 1870, Stanhope worked largely in tempera and founded the Society of Painters in Tempera in 1901. His approach to tempera painting, oil painting and fresco work, was universally regarded to be a serious attempt to produce contemporary work in the mode of the Italian Masters and he became one of the most talented of the Aesthetics.

The artist to whom, 'Venus Rising From the Sea' clearly owes much in its conception, is Sandro Botticelli, whose painting 'The Birth of Venus' (Uffizi Gallery, Florence) clearly inspired this painting. The conception of the rocky coastline of the bay to which Venus takes her first steps, is based upon the background of Botticelli's 'Pallas and the Centaur' (National Gallery, London) whereas Venus' action of drawing her tresses of wet hair around her echoes that of Botticelli's Goddess of Love. The marvellously quirky forms of the dolphins are also reminiscent of Renaissance decoration, as though they had swum forth from one of Bernini's fountains or the decorations of the Pitti Palace.

Stanhope painted two nudes connected to 'Venus Rising From the Sea', depicting 'Flora' and 'Andromeda' (collection of Sebastian de Ferranti). The former was another painting which took it's name from a famous work by Botticelli, the 'Primavera' (Uffizi Gallery, Florence) and depicts the same nude figure stepping from a bank of flowers rather than the back of a dolphin and with roses and cherubs behind, instead of the ocean. 'Venus Rising From the Sea' epitomises Stanhope's aims to emulate the Masters of the Rennaisance, in his choice of one of the Cinquecento's most widely represented figures, his poetic rendering of the subject and his choice of tempera as a medium.