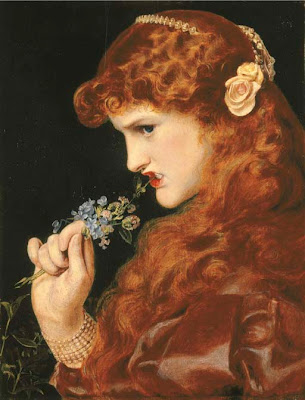 Betty Elzea notes that this painting was probably traced from a drawing of the same title of 1867, but is enriched by the addition of a jewelled headband and hair ornament. The subject of a single femme fatale, presented half length, owes much to Rossetti, with whom Sandys shared a house in Chelsea in 1866. Sandys reputation amongst his fellow artists was to rise after Rossetti pronounced him 'the greatest of living draughtsmen', but the friendship foundered in 1869 after Rossetti accused Sandys of plagiarism.

The sitter is Sandys's common-law wife, Mary Emma Jones, who abandoned a theatrical career to bear him nine children. She, and her sisters Augusta and Millie, sat to both Sandys and Rossetti: the artists also shared a model in Keomi, the exotic Norfolk gypsy who appears in so much of their work. The composition prefigures that of Proud Maisie of 1868, Sandy's most popular and successful image, which he was to replicate at least thirteen times in various media: the prime version, in oil, is now in the Victoria and Albert Museum. The composition is almost identical to Love's Shadow, except that where in our picture the sitter is chewing on forget-me-nots, in Proud Maisie she draws on a lock of her hair. The picture was to provoke ardent reactions from male admirers. Swinburne in Royal Academy Notes wrote: ' ... the other [study] of a woman's face, is one of his most solid and splendid designs; a woman of rich, ripe, angry beauty, she draws one lock of curling hair through her full and moulded lips, biting it with hard bright teeth, which add something of a tiger's charm to the sleepy and crouching passion of her fair face'. The title, Proud Maisie was taken from Sir Walter Scott's poem, 'The Pride of Youth', which appears at the end of Chapter 40 of The Heart of Midlothian (1818):

Proud Maisie is in the wood,
Walking so early;
Sweet Robin sits on the bush,
Singing so rarely.

"Tell me, thou bonny bird,
When shall I marry me?" -
When six braw gentlemen
Kirkward shall carry ye.'

"Whom makes the bridal bed,
Birdie say truly?" -
"The grey-headed sexton
That delves the grave duly.

"The glow-worm o'er grave and stone
Shall light thee steady.
The owl from the steeple single,
'Welcome, proud lady'".

The picture has become an icon of rapacious female sexuality, and marks a point in Sandys's career before his depictions of women became darker and more obtuse. The abundant hair which Sandys so enjoyed in his wife was to feature in many of the other Pre-Raphaelites' work. Perhaps it is no coincidence that Rossetti was simultaneously painting Lady Lilith (1868) in which Adam's first wife is seen combing her luxuriant hair.

Sandys was born in Norwich, the son of a painter. After working for many years in Norfolk he moved to London in 1851. He first came to the attention of the Pre-Raphaelites in 1857 when he produced an etching entitled A Nightmare which parodied Millais's picture Sir Isumbras at the Ford, shown at the Royal Academy of that year. Being a formidable draughtsman he was also to make a significant contribution to the movement for better book illustration, through his work for The Cornhill, Once a Week, Good Words and other journals. Sandys's later years were spent executing large portrait drawings of the Norfolk gentry, executed in chalk on blue paper in a characteristically meticulous technique. Several survive in that county, and they frequently appear at auction.
Posted by Hermes at 5:00 PM