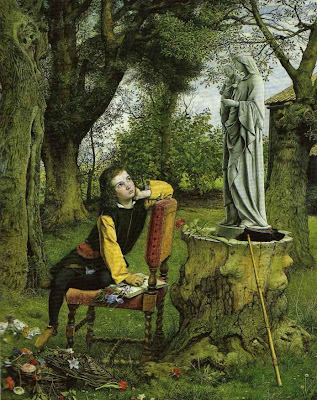 1856-7
oil on canvas
City of Aberdeen Art Gallery
.
Dyce was an Anglo-Catholic and came under the influence of the Nazarene School on his visits to Rome in the 1820's. From 1844 he was deeply involved in painting frescoes for the new Houses of Parliament in a Medieval style. Dyce was close to and influenced by the Pre Raphaelites particularly in his use of colour. This painting relates to an old story that as a boy Titian used the juice of flowers to colour a drawing of the Madonna. Notice his use in the painting of the monochrome Madonna but bright surrounding flowers (don't worry I didn't notice it at first either!).
Posted by Hermes at 6:00 AM

There's a dozen or more in this; the pointed yard stick angle completes the synonymy.