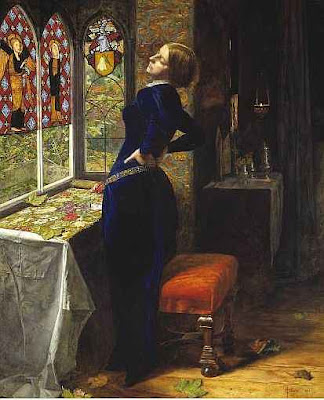 1851
Oil on wood (mahogany)
support: 597 x 495 x 15 mm frame: 876 x 767 x 55 mm
Tate Gallery
Accepted by H.M. Government in lieu of tax and allocated to the Tate Gallery 1999
This is Mariana from Shakespeare’s play Measure for Measure. She leads a solitary life, rejected by her fiancé after her dowry was lost in a shipwreck. But she is still in love and longs for him. Mariana’s tired pose, her embroidery, and the fallen leaves suggest the burden of her yearning as time passes.The painting was originally exhibited with lines from Alfred Tennyson’s poem Mariana:She only said, ‘My life is dreary– He cometh not!’ she said;She said, ‘I am aweary, aweary–I would that I were dead!’
Most of the picture was painted in Oxford and was inspired bythe stained glass in the Chapel of Merton College. The garden glimpsed through the window is said to be that of Thomas Combe, with whom Millais was staying. Notice the mouse in the right bottom corner, an allusion to a poem by Tennyson.
http://www.tate.org.uk/servlet/ViewWork?cgroupid=-1&workid=26762&searchid=false&roomid=false&tabview=text&texttype=10
Posted by Hermes at 6:00 AM