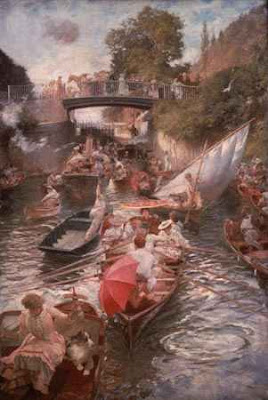 http://www.liverpoolmuseums.org.uk/ladylever/collections/boulterslock.asp
http://www.liverpoolmuseums.org.uk/picture-of-month/displayPicture.asp?id=164&venue=7
Edward Gregory was born in 1850 in Southampton. He started work in the drawing office of a steamship company but moved to London after meeting another aspiring artist who also grew up in Southampton, Hubert Herkomer. Herkomer's masterpiece, �The Last Muster� also hangs in the Lady Lever Art Gallery. Gregory attended the Royal Academy Schools and the Royal College of Art for brief periods but was largely self-taught. From 1871 to 1875 he produced drawings for �The Graphic�, an influential illustrated magazine with a large circulation. Herkomer worked for the same magazine. Gregory was a painter of street scenes and city life. He exhibited at the Royal Academy throughout his career and was President of the RA between 1898 and 1909, the year of his death.
Posted by Hermes at 6:00 AM