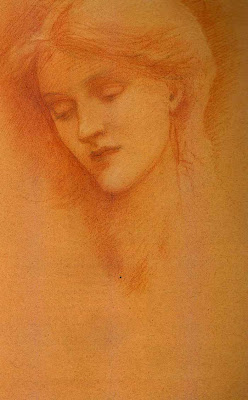 The drawing bears the following inscription on the reverse: ''I think this is a portrait of Burne-Jones' daughter when young - Mrs Mackail who I know some years ago - in the 1920s. She used to visit with her brother (Sir Philip Burne-Jones). She was when young ... what is I think described as 'Marie Grey', ash blond with lilac blue colour eyes - a striking feature of hers''.
Posted by Hermes at 6:00 AM