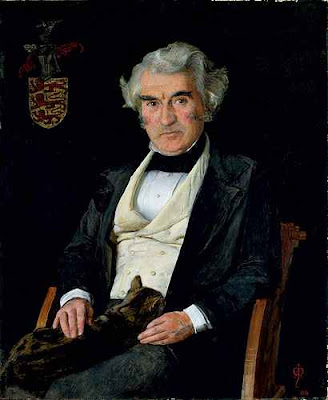 
The link between Oxford and the Pre-Raphaelites was made first by Millais who arrived in 1846 to visit his half brother. At Oxford, Millais met his first patron, the art dealer and framer, James Wyatt, who provided him with studio space in the High Street in 1849 and commissioned portraits of himself and his family. Millais was not yet a Pre-Raphaelite when he met Wyatt and the most important picture bought by Wyatt from Millais, his Cymon and Iphigenia, was painted in the manner of older, academic artists. But Wyatt's support gave Oxford an important place in Millais's earliest Pre-Raphaelite compositions. Christ in the Carpenter's Shop was, according to Hunt, inspired by a sermon heard in Oxford and a window in Mariana is based on one in Merton College. But it was the landscape of Oxford. the woodlands of Botley and Shotover. which were of real use to the artist who, like Hunt and his friends, often painted the background of pictures in the open air. Oxford also provided the Pre-Raphaelites with their first major patron, Thomas Combe, who made friends with Millais and with his disciple, Charles Allston Collins, in 1850, while the two young artists were painting at Botley, Combe, who made his fortune as printer to the University from 1838 to 1872. spent part of it in building a school and churches for the families of his employees. He supported 'The Oxford Movement', a reforming group within the Church of England which bitterly divided English society in the mid century by attempting to reverse the effects of the Reformation on the liturgy. The hint of Catholic or 'High Church' bias which disturbed some critics in the works of the Pre-Raphaelites. could only have attracted Combe. In the first instance, however, the Combes were probably not drawn to the philosphy of the Brotherhood as much as they were drawn to Millais's youthful talent and aimiable character.

Millais, then, took the initiative, teaching his wealthy friends to appreciate the merits of the Pre-Raphaelites at a time when their reputation was in the balance. By the end of September, 1850. Collins and Millais had both moved into Combe's house in Walton Street where Millais painted Combe's portrait and Collins finished the garden in the background of his Convent 'Thoughts. 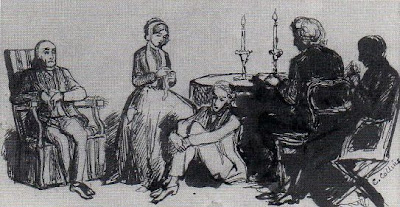 Millais and Collins met Combe while they were painting out of doors at Botley in 1850. Mrs Combe, an ex-pupil of the watercolourist, David Cox, presided over a good humoured Salon in her house at the University Press in Walton Street where this portrait, and a companion portrait, by Collins, of Martha Combes uncle, William Bennett, were painted. According to a label in Combe's handwriting on the back, Millais painted this portrait in four sittings of two hours each. The coat-of-arms is that granted in 1584 to John Combe of Stratford, a friend of Shakespeare. Combe denied any connection with his namesake when Hunt asked him about this. But he was apparently interested in heraldry and decorated the drawing room where his Pre-Raphaelite collection was displayed with a frieze of fifty-nine metal shields representing the arms of the knights who fell at the battle of Caerlaverock.
Posted by Hermes at 6:00 AM