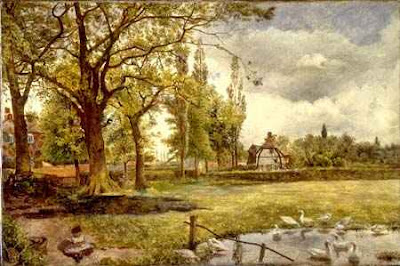 [Hale, Lancashire]
William Davis (1812-1873), born in Dublin, trained in the Liverpool Academy Schools from 1846 until about 1849 and was Professor of Drawing there from 1856-59. He was one of the Liverpool artists who adopted Pre-Raphaelite practice. Davis was friendly with the Pre-Raphaelite London circle, and was a member of the Hogarth Club. Most of his work was done for local Liverpool patrons. In 1870, he moved to London.
http://www.liverpoolmuseums.org.uk/online/pre-raphaelites/hale.asp
Posted by Hermes at 6:00 AM