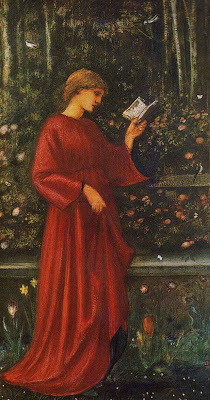 Hammer Price with Buyer's Premium: 20,700 GBP (1998)
signed with initials, l.r.: EBJ; inscribed on a hand-written label attached to the backing Princess Sabia (sic) By Sir E. Burne-Jones, Bart. One of a series of Drawings in illustration of St George & the Dragon
watercolour and bodycolour on linen
37.5 by 20 cm., 14 3/4 by 8 in.

This is a gouache version of Burne-Jones's oil painting showing Princess Sabra walking in a garden holding in her hand a prayer book or missal. The image was devised as the opening scene in the sequence of murals that the artist painted in 1865-7 to tell the story of St George and his rescue of the Princess Sabra from the dragon to which she was to be sacrificed by the people of her father's kingdom. The complete cycle of oil paintings was made in response to a commission from the watercolour painter Myles Birket Foster, and was installed in Foster's house at Witley in Surrey. The present gouache version corresponds closely to the pencil drawing that Burne-Jones made of the subject (now in the British Museum). The entire cycle of St George paintings was sold by Foster in 1897. They were then retouched by Burne-Jones, exhibited as a series in Munich, and then dispersed. The oil version of The Princess Sabra is now in the Musee d'Orsay, Paris.
The present watercolour bears all the hallmarks of Burne-Jones's own rich, ornate and highly characteristic
method of painting in bodycolour of the second half of the 1860s. Burne-Jones frequently made second versions of his subjects, to experiment with different scales or to translate the image into another medium. It is possible however that Charles Fairfax Murray, who from 1866 onwards was employed by Burne-Jones as a studio assistant, played some part in the preparation of the present watercolour. Fairfax Murray worked on the oil versions of the St George series - indeed the later paintings in the cycle are largely by him.

The early history of the present watercolour is not known. However, it seems likely that it remained in Burne-Jones's possession until the last few years of his life, and that it was sold through Agnew's some time in the mid-1890s. The handwritten label on the backing - where the artist is referred to as 'Sir Edward' (indicating that it was attached after 1894 which was the date of his being raised to the baronetcy) - presumably datesfrom the time of its sale. It is possible that further touches were made to the watercolour then, and it is likely that the inscribed initials EBJ were also applied in the last years of Burne-Jones's life.
Posted by Hermes at 6:00 AM